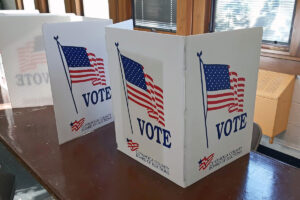 A former election judge pleaded guilty to voter fraud during sealed proceedings back in March. The court unsealed the matter on May 21, just as the debate over mail-in voting is taking shape.

Domenick J. Demuro (D), who is now 73 admitted that he took bribes during 2014, 2015, and 2016 primary elections in Philadelphia. He will be sentenced June 20 for conspiring to violate civil rights and bribery. Two very serious offenses.

According to the Department of Justice, who released a statement upon unsealing the proceedings, Demuro admitted that he accepted bribes in the form of money and “other things of value.” What those things are have not been disclosed.

The bribes were to increase vote totals for certain candidates on voting machines, and for including those votes in final official numbers.

The released statement does not disclose which candidates he committed voter fraud for.

Demuro added that a “political consultant” provided directions and money to add votes for numerous candidates they supported, or candidates who had in fact hired the consultant. This included candidates for judicial office, at the local and state levels.

During the proceedings, Assistant Attorney General Brian A. Benczkowski of the Justice Department’s Criminal Division said: “This defendant abused his office by engaging in election fraud for profit. Today’s conviction makes it clear that the Department of Justice will do all in its power to protect the integrity of elections and maintain public confidence in all levels of the elected government.”

The big question is how did Democrat Domenick J. Demuro do it? Very easy is the answer.

CHECK OUT: According to a Constitutional lawyer, stats have every right to forcibly vaccinate citizens.

U.S. Attorney William M. McSwain of the Eastern District of Pennsylvania said during the proceedings: “Demuro fraudulently stuffed the ballot box by literally standing in a voting booth and voting over and over, as fast as he could, while he thought the coast was clear. This is utterly reprehensible conduct. The charges announced today do not erase what he did, but they do ensure that he is held to account for those actions.”

That’s right, Democrat Demuro just walked into a voting booth and voted while no one was watching. It’s ridiculous and yet true.

A second issue is that we don’t know who he was committing voter fraud for. Finding that out should have been a priority in the hearing, especially as a consultant, who may still be working in politics was involved.

Captain Leo Hannon, Director of the Pennsylvania State Police, Special Investigations Division said: “The citizenry of the City of Philadelphia, as well as this Commonwealth and these United States, needs to be confident in the integrity of our elections.”

Hopefully, more proceedings will occur to uncover the full story because without knowing who was involved, how can citizens that voted in 2014, 2015, and 2016 elections have any faith in the system?

Anything but in-person voting cannot be trusted and that clearly includes the election judges.