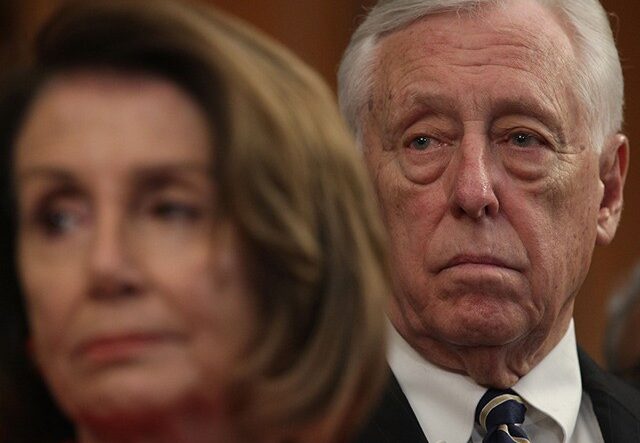 House Democrats on Wednesday stalled a bill that would have provided additional security for Supreme Court Justices on the same day a man was arrested for attempting to murder Justice Brett Kavanaugh.

House Republican Leader Kevin McCarthy (R-CA) made a unanimous consent request on the House floor to bring up S. 4160 for a vote. S. 4160, which passed the Senate by a unanimous vote, would have allocated additional security for the justices’ family members.

Despite McCarthy’s request, Speaker Pelosi and the Democrats failed to comply with McCarthy’s proposal to bring the bill to vote.

McCarthy condemned the House Democrats for their refusal to vote on the bill and noted that their refusal came on the same day a man was arrested for plotting to kill Justice Kavanaugh.

Earlier today, a man was arrested for plotting to kill justice Kavanaugh. Over a month ago, the Senate unanimously passed a bill to provide more security for Supreme Court justices and their family. But House Democrats have let that Bill gather dust. This is the same party whose heated rhetoric has encouraged political pressure on conservative justices.

“Former White House press secretary Jen Psaki said, ‘I know that there’s an outrage right now, I guess, about protests that have been peaceful to date. And we certainly do continue to encourage that. Outside judges homes. And that’s the President’s position,’” said McCarthy.

McCarthy also drew attention to Democrat Senate Leader Chuck Schumer’s (D-NY) comments that conservative justices “will pay the price” for issuing an abortion opinion he did not like. McCarthy added:

And majority leader Schumer said, ‘I want to tell you justice Kavanaugh and justice Gorsuch, you have unleashed a whilrwind and you will pay the price. You won’t know what hits you if you go forward with these awful decisions.’ Mr. Speaker with words like that, and threats like these Congress cannot afford to wait.

“We have a duty to protect the court, the justices and their families from political violence and intimidation. And we can meet that duty tonight before the House adjourns by sending this bill to the President’s desk,” McCarthy continued.

Justices’homes have been the target of protests since radical pro-abortion protesters were outraged with the Supreme Court’s leaked opinion that would overturn the landmark abortion case Roe v. Wade.

Since the leaked opinion, these radical protesters have demonstrated in front of the homes of Justices Neil Gorsuch, Amy Coney Barrett, Clarence Thomas, Samuel Alito, Kavanaugh, and Chief Justice Roberts.

McCarthy is not the only Republican to call out the House Democrats for blocking the bill from coming to the floor for a vote. Republican Senate Leader Mitch McConnell also had strong words for Pelosi and her colleagues.

This is where we are… if these reports are correct, an assassination attempt against a sitting justice, or something close to it. This is exactly the kind of event that many worried the unhinged, reckless apocalyptic from prominent figures toward the court, going back many months, and especially in recent weeks, could make more likely.

House Democrats have spent weeks blocking the measure that passed here unanimously related to security for Supreme Court justices. That needs to change, and it needs to change right now… No more fiddling around with this… They need to stop their multi-week blockade against the Supreme Court security bill and pass it before the sun sets today.

“The arrest of this individual proves these threats to the Justices’ lives are horrifyingly real, and it’s unconscionable for House Democrats to leave their families without police protection for even one more day,” Sen. John Cornyn (R-TX) said.

House Democrats are reportedly holding out on the bill to include additional protections for Supreme Court employees. When asked about the bill’s status, House Democrat Leader Steny Hoyer (D-MD) told reporters on Wednesday, “I hope we’re close.”