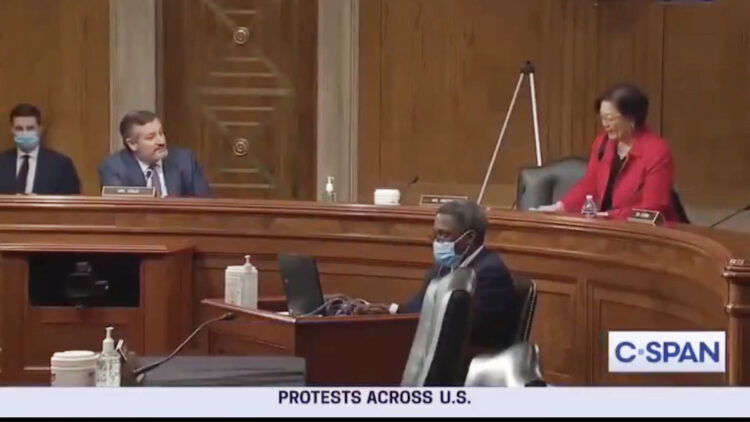 Tuesday, August 4: During a Senate subcommittee hearing a Democrat chose to walk out rather than condemn domestic terrorists Antifa.

The hearing titled, “The Right of the People Peaceably to Assemble: Protecting Speech by Stopping Anarchist Violence,” was hosted by Texas Republican Sen. Ted Cruz.

During an interview with Fox News, Cruz said: “We’re seeing our country torn apart. Violent anarchists and Marxists are exploiting protests to transform them into riots and direct assaults on the lives and safety of their fellow Americans.”

CHECK OUT: George Floyd leaked footage paints a different picture and could prove some officers were overcharged.

Sen. Hirono, who objected to the focus of the hearing said: “What we’ve seen in Portland, Oregon, is peaceful protesters in need of protection from federal officers.”

She continued: “The hearing we should be having is one called the right of the people peaceably assemble without being beaten up by unidentifiable federal agents.”

Considering “peaceful protesters” had already created an autonomous zone, caused arson, vandalized downtown, set-up road-blocks, and much worst for 50-days before federal officers arrived in Portland. How can Sen. Hirono or any Democrat blame federal officers for violence but ignore everything that came before them?

Another Democrat present was Illinois Sen. Dick Durbin. He came closest to condemning Antifa and violent riots when saying: “Neither violence nor vandalism is acceptable in the exercise of one’s constitutional rights.”

Yet, it remains far short of actually condemning the people involved in the violence.

Sen. Durbin also deflected blame by saying it isn’t only leftists carrying out political violence. His example pointed to the mass-murder of 23 people in El Paso, Texas back in 2019. An atrocity committed by a right-wing extremist gunman, who allegedly killed because of anti-Hispanic hatred.

CHECK OUT: Antifa anarchist who threw an IED at the Portland courthouse gets identified by the riot jacket his grandma got him.

Acting Deputy Secretary of The Department of Homeland Security, Ken Cuccinelli testified at the hearing. Reporting that 140 officers had been injured during the riots in Portland.

He continued: “We’ve had accelerants poured into the courthouse while commercial grade mortar style fireworks were being shot into the doors and attempt to light it.”

That doesn’t sound like peaceful protests to us and it just adds to the confusion as to why Democrats can condemn federal officers without issue. Yet, they cannot condemn domestic terrorists Antifa, despite the evidence of their involvement.

What’s even more baffling is that, some in the Democrat party would even say Antifa is imaginary.

CHECK OUT: Armed protester aims at SUV breaking their roadblock and accidentally shoots other protesters in head and leg.