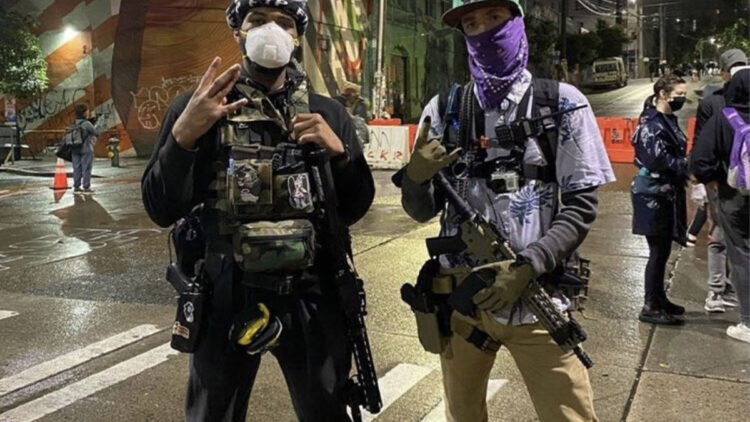 The Seattle ‘Capitol Hill Autonomous Zone’ has officially been shortened to CHAZ. A zone that allegedly left the United States on Monday, who have listed demands for the City of Seattle, and who are now being policed by the ‘People’s Force,’ which encompasses a warlord and his well-armed crew.

You would think that Washington’s Governor Jay Inslee (D) and Seattle’s City Mayor Jenny Durkan (D) would be pushing to take back control. In fact, it is quite the opposite.

There seems to be overwhelming support and a positive media narrative for this whole situation. As if Democrats and the mainstream media have forgotten the anarchists took control of the zone through nightly violence and a viable threat that the police precinct was to be burned down.

Plus the media are calling it a free speech zone, yet that’s only true if you share a leftist narrative (warning: the image below proves this but also includes bad language).

The only person in government who sees this as a problem is President Trump. He wrote: “Radical Left Governor Jay Inslee and the Mayor of Seattle are being taunted and played at a level that our great Country has never seen before. Take back your city NOW. If you don’t do it, I will. This is not a game. These ugly Anarchists must be stopped IMMEDIATELY. MOVE FAST!”

The President wants law and order, and it is no surprise considering the Mayor came out in a video saying that Capitol Hill has always been the home of demonstrations, freedom of speech, and even talked up her days of protesting. She’s literally comparing what these anarchists have done to peaceful protests.

Ironically, on June 1, the Mayor admitted there had been violence and wrote: “I want to acknowledge that much of the violence and destruction, both here in Seattle and across the country, has been instigated and perpetuated by white men.”

CHECK OUT: CNN reported that President Trump wasn’t allowed to label ANTIFA a Terrorist organization, yet the evidence points to the fact that everything they said was wrong.

The Governor Didn’t Even Know About Capitol Hill

You think the Mayor is bad, Gov. Jay Inslee didn’t even know there was an issue in Seattle until June 11. CHAZ was born on the evening of June 8.

Once Gov. Inslee had caught up, he wrote: “I spoke with Mayor Jenny and her team about the situation on Capitol Hill. Although unpermitted, and we should remember we are still in a pandemic, the area is largely peaceful. Peaceful protests are fundamentally American, and I am hopeful there will be a peaceful resolution.”

Apparently you need a permit to block off a six-block area, to denounce yourselves as part of the United States, and supersede the police department with your own militia. Plus that is ignoring the fact that they took control via violence and threat of arson.

Another question is how can anyone, anywhere still be pushing the pandemic lockdown? Thousands of people can protest without issue yet people in a church or in a small group pose a real and viable threat. It gets even more ridiculous.

The Gov. continued: “What we will not allow are threats of military violence against Washingtonians coming from the White House. The U.S. military serves to protect Americans, not the fragility of an insecure president.”

The threat of military violence is not acceptable but the way in which CHAZ was taken over, which was through threat and violence is fine?

The issue is that this madness will never be brought to light. Reality and fact have left the building and all we’re left with is spin and narrative.

You would think the above madness couldn’t be topped, well hold on to your hat. Seattle’s Mayor later appeared on CNN with Chris Cuomo and said the anarchists in CHAZ could have a summer of love.