Democrats Threaten to Punish Trump for Not Testifying at Impeachment Trial 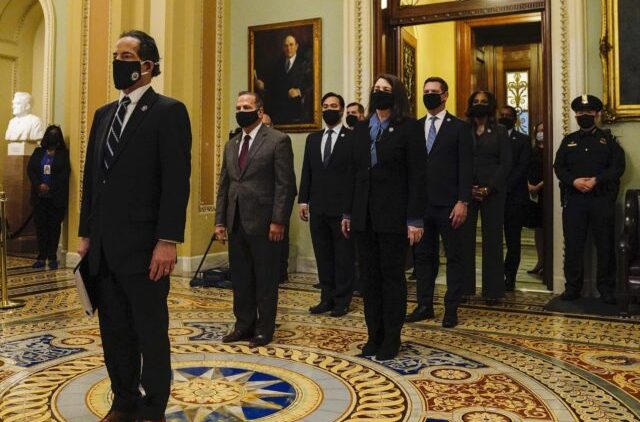 Democrats reiterated Monday a threat to punish former President Donald Trump for not testifying at the impeachment trial in the Senate, which begins Tuesday.

[T]he House has invited President Trump to voluntarily testify under oath, yet President Trump immediately rejected that opportunity to tell his story. The House will establish at trial that this decision to avoid testifying supports a strong adverse inference regarding President Trump’s actions (and inaction) on January 6.

The Democrats were responding to Trump’s lawyers’ claim that Democrats’ rushed impeachment, which defied all previous procedural conventions governing impeachment in the House, denied the president the constitutional due process of law.

The Fifth Amendment to the U.S. Constitution provides that “No person … shall be compelled in any criminal case to be a witness against himself, nor be deprived of life, liberty, or property, without due process of law.” The impeachment trial is not a criminal case; however, many constitutional scholars argue that the same principles ought to apply — there, above all.

When Rep. Jamie Raskin (D-MD) wrote to Trump’s lawyers last week, inviting Trump to testify, he made a similar threat: “If you decline this invitation, we reserve any and all rights [sic], including the right [sic] to establish at trial that your refusal to testify supports a strong adverse inference regarding your actions (and inaction) on January 6, 2021.”

As constitutional scholar Jonathan Turley observed, Raskin — a former law professor — is threatening to overturn centuries of progress, and jurisprudence, establishing that a defendant has the right not to testify against himself or herself, and that the exertion of that right does not create a negative inference about his or her guilt.

[T]he statement of House manager Rep. Jamie Raskin, D-Md., this week was breathtaking. A former law professor, Raskin declared that the decision of Trump not to testify in the Senate could be cited or used by House managers as an inference of his guilt — a statement that contradicts not just our constitutional principles but centuries of legal writing.

The statement conflicts with one of the most precious and revered principles in American law that a refusal to testify should not be used against an accused party.

Central to this right is the added protection that the silence of an accused cannot be used against him in the way suggested by Raskin. There was a time when members of Congress not only respected this rule but fought to amplify it.

The Supreme Court has been adamant that the type of inference sought by Raskin is abhorrent and abusive in courts of law.

The trial will start Tuesday at 1:00 p.m. ET, and will reportedly begin with four hours of arguments about the constitutionality of the trial, followed by a vote. Thereafter, each side will have 16 hours for opening arguments.