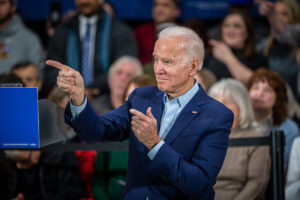 Joe Biden seems to be blaming President Trump for everything, from turning his back on the international fight against COVID-19, to dam failures in Michigan.

May 19: Two dams fail and over 10,000 residents of Edenville and Sanford, in Michigan, are evacuated. Gov. Gretchen Whitmer, the person some believe Joe Biden will pick to run as Vice President, declares a state of emergency.

May 26: Homeowners impacted by the flooding file a class-action lawsuit against Michigan’s Department of Environment, Great Lakes, and Energy. According to the lawsuit, the Edenville Dam was the first to fail. The water from the first dam flowed south and caused the Sanford Dam to also fail.

Sometime between the dam failing and May 27, in a video interview regarding Michigan, Joe Biden said: “The President has really made it an effort to do everything he possibly could to make it more difficult for her (Gov. Whitmer) to take care of the public in your (Michigan) state, including the god-awful dams that broke.”

The events are devastating, Joe Biden is right about that. However, he’s blaming the President when he should be blaming people in the Democrat Party.

CHECK OUT: President Trump believes he has a chance to drain the swamp and break the deep state.

In 2018, the federal government, run by President Trump revoked the hydro-electric license for the Edenville Dam. According to the court filings, the dam was unable to handle the required Probable Maximum Flood (PMF).

Simply put, it couldn’t handle high-levels of water. After that point it was up to Michigan to solve. So why didn’t they?

The filing to revoke the dam’s license happened in September 2018, during Michigan elections, which concluded in November 2018. The Governor in-charge at the time of the revoked license was Republican Gov. Rick Snyder. The incoming Governor, who would take office January 1, 2019 was Gretchen Whitmer, Democrat.

At this point it could be argued that both Governors are to blame. However, the Republican had three-months to leave office, while the Democrat, who ran on healthcare and infrastructure promises, has had eleven-months COVID-19 free to address the dam.

What makes us certain Joe Biden should be blaming Democrats, is that weeks before the dam failure, the Michigan Attorney General filed to sue the Dam owner for illegally lowering water levels.

CHECK OUT: Pastor pleads for protection against Democrat Mayor who is relentlessly shutting down churches.

In April, Michigan’s Attorney General Dana Nessel sued the owner of the Edenville Dam for illegally lowering the lake in 2018 and 2019. Considering the reason why the Dam had its license revoked in 2018, it makes sense for them to lower the water to try and stop floods.

The reason Nessel sued the Dam’s owner was because, by lowering the water in 2018 and 2019, they had killed “thousands, if not millions, of freshwater mussels.”

A state lawyer said: “Defendants (the owners) wrongfully exerted dominion over the freshwater mussels and caused their death which denies and is inconsistent with the state’s right to them.”

Just in case you’re wondering, Attorney General Dana Nessel is a member of the Democrat Party.

CHECK OUT: Watch as shoppers hurl abuse at another shopper who isn’t wearing a mask. Mob mentality or understood?