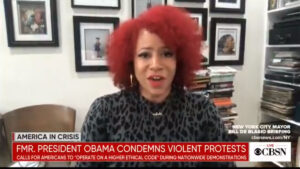 According to a prize-winning author, the riots terrorizing Americans and destroying property, shouldn’t be called violent because it downplays actual violence, like police brutality.

During the interview with CBS News, Pulitzer Prize-winning author Nikole Hannah-Jones was asked how the riots should be interpreted, a bizarre question considering the massive destruction. Her answer was shocking.

Hannah-Jones said: “Violence is when an agent of the state kneels on a man’s neck until all of the life is leached out of his body. Destroying property, which can be replaced, is not violence. To use the same language to describe those two things is not moral”

Obviously the reaction online was one of shock.

National Review editor Rich Lowry wrote: “According to this logic, burning down a building isn’t an act of violence.”

A senior writer for Real Clear Investigations wrote: “When I moved to DC in the late 90s, it still wasn’t close to recovering from the 1968 riots. The economic devastation in cities has long-term consequences, leads to despair, and it will kill people just as surely as bad cops do. This is such a terrible argument.”

Plus, Ben Shapiro wrote: “Disgusting and stupid comments. Such comments only deserve one response: a Pulitzer Prize.”

Anyone who supports this line of thinking should hand over their money to people who have been victims of the violent riots so that they can replace the property which has been destroyed.

CHECK OUT: Looters are using explosives in Philadelphia to take ATMs packed with money.

This isn’t the first time The New York Times reporter, who spearheaded the ‘1619 Project’, a collection of articles that say slavery was a foundational aspect of America, has been slammed online.

On June 1, President Trump said: “I am mobilizing all available federal resources, civilian and military, to stop the rioting and looting, to end the destruction and arson. And to protect the rights of law-abiding Americans, including your Second Amendment rights.”

In response, Hannah-Jones wrote on Twitter: “This reference to the 2nd Amendment is a head scratcher only if you don’t know that 2nd Amendment was in fact created to ensure Southern slaveowners the right to maintain & arm slave patrols to put down insurrections amongst the enslaved. Now he’s invoking agnst their descendants.”

People online pointed to historical facts as to why the Second Amendment was created. Yet, after the tweet, Hannah-Jones defended her statement by saying there was a book coming out by an actual historian.

However, several historians, including one who worked on the ‘1619 Project’ has stated that both the New York Times and Nikole Hannah-Jones ignored her objections over a key aspect of the project.

Leslie Harris, the Northwestern University historian in question wrote: “On August 19 of last year I listened in stunned silence as Nikole Hannah-Jones, a reporter for the New York Times, repeated an idea that I had vigorously argued against with her fact-checker: that the patriots fought the American Revolution in large part to preserve slavery in North America.”

Harris continued: “Despite my advice, the Times published the incorrect statement about the American Revolution anyway, in Hannah-Jones’ introductory essay. In addition, the paper’s characterizations of slavery in early America reflected laws and practices more common in the antebellum era than in Colonial times, and did not accurately illustrate the varied experiences of the first generation of enslaved people that arrived in Virginia in 1619.”

It appears that Hannah-Jones wants to re-write the meaning of words and the reason behind the Constitution.