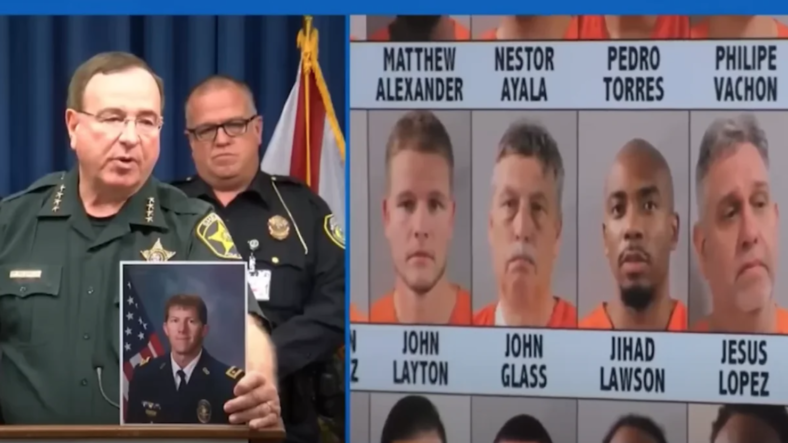 There were 160 people arrested during an undercover sting targeting human trafficking. A Disney employee, corrections officer, a former deputy police chief, and teachers were among those arrested.

During the press conference about Operation Fall Haul, Polk County Sheriff Grady Judd joked, “Where would we be with an undercover operation and no Disney employees? Oh yes, we always have Disney employees.”

Disney bellhop Guillermo Perez, 57, was arrested after trying to have sex with an undercover detective for $80, according to the Polk County Sheriff’s Office.

Samy Claude, 26, who was often contracted by Disney as a photographer, was also arrested. He reportedly attempted to have sex with an undercover cop and offered her a bag of sour Skittles.Don’t miss out on content from Dave Rubin free of big tech censorship. Listen to The Rubin Report now.

Keith Nieves, 24, was arrested for two counts of soliciting a prostitute. Nieves is a correctional officer at the Lake County Correctional Institution.

Jason DiPrima, 49, allegedly gave an undercover detective $180 and a multi-pack of White Claw Hard Seltzer. At the time of his arrest, DiPrima was the Deputy Chief of Administration for the Cartersville Police Department in Georgia. DiPrima has since resigned from his position.https://871c2588de15bb8bd5c6babf90a8d745.safeframe.googlesyndication.com/safeframe/1-0-38/html/container.html

“He is no longer a police officer in Cartersville, Georgia, and he needs to work on reconstructing his life with his family. He did a very mean, nasty thing to his family and he certainly embarrassed all the people of Cartersville,” Judd said during a news conference. “The Cartersville Police Department is a very professional police department in Georgia and they didn’t deserve what Jason (DiPrima) did.”

John Layton, 26, agreed to pay $40 for a sex act, according to police. Layton is a non-faculty coach at West Orange High School in Orange County. At the time of his arrest, he was purportedly wearing a school track and field shirt.

Cameron Burke, 43, was charged with soliciting a prostitute. Burke was currently out on bond for lewd and lascivious battery on a 15-year-old student at Oak Ridge High School in Orange County. At the time of his arrest for child sexual abuse, Burke was employed as a computer technician for the school.

John Glass of Verona, 61, was arrested for soliciting a prostitute for unprotected sex, according to police. Glass was reportedly on vacation in Kissimmee with his family from Kentucky. He was one of 15 people from outside of Florida to be arrested during the sting.

During the sex trafficking operation, a woman allegedly attempted to sell a pound of marijuana to an undercover detective while she had her 2-year-old child with her.

The Polk County Sheriff’s Office said seven people were arrested and suspected of being in the country illegally.

The Polk County Sheriff’s Office said it had encountered two human trafficking victims during the operation, along with five other possible victims.

WFLA reported, “One of the victims deputies encountered was a woman who was 10 weeks pregnant and was given drugs and fentanyl in hopes to abort her unborn child, who she did not want.”

For the human trafficking victims, the operation had the following social service organizations to assist: One More Child, Heartland for Children, My Name My Voice, and the Children’s Home Society of Florida.

“From the moment they come into the operation, we want to immediately hand them off to our social service friends and our counselors so they can begin working with these victims of human trafficking,” Judd noted.