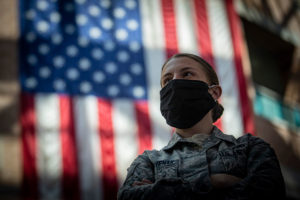 Two medical professionals with a combined 40-years of experience in dealing with viruses and respiratory infections have become whistleblowers on COVID-19 and the effects of lockdown.

While watching the news from China in January, the medical professionals knew it would reach the United States. Before the demand increased, they ordered many COVID-19 tests in preparation.

Over the following months, they’ve tested thousands of people and have learned what many top epidemiologists are theorizing. COVID-19 is widespread and most importantly far less deadly than what’s being reported.

April 26, The two medical professionals took their data-backed findings and conducted their own press conference. Unlike the predictive models, the numbers given by the doctors lead to several revelations rather than pure fear-mongering.

When asked during the press conference whether California should have shut down its economy, their answer was unanimous: “If you’re going to dance on someone’s constitutional rights you better have a good reason, you better have a really good reason, not just a theory. The data is showing us it’s time to lift (the lockdown) so if we don’t lift, what is the reason?”

The China Communist Party allegedly used a lockdown to get the COVID-19 virus under control. China’s solution, the World Health Organization’s advice, and the predictive models pushed this country into reacting.

It’s a valid point and the doctors conclude that lockdowns need to be lifted, not just because of the constitution, but because it is detrimental to people’s mental and physical health.

During the press conference the doctors dived into their numbers for California. The key points were:

They continued with extrapolated data. They first picked out New York:

The doctors pointed out that as the amount of cases increases, the percentage of deaths gets smaller: “Two months ago we didn’t know this. The more you test, the more positives you get. The prevalence number goes up, and the death rate stays the same. So [the death rate] gets smaller and smaller and smaller. And as we move through this data—what I want you to see is—millions of cases, small death.”

The data then turned to Sweden, who have used the ‘herd-immunity’ strategy to the virus rather than stricter lockdowns:

Remember in Sweden their daily life is almost unchanged. Younger school children are at home and you cannot have gathering bigger than 50. The doctors added: “The initial models were woefully inaccurate. They predicted millions of cases of death—not of prevalence or incidence—but death.”

The doctors final batch of data compares COVID-19 against the flu:

The doctors concluded by questioning the lack of pandemic lockdown for the flu, considering the similar numbers.

CHECK OUT: Joe Biden is under investigation for sexual assault and the mainstream media aren’t even hiding their double standard.

The Effects Of Lockdown

We’re all aware that social isolation will drive alcoholism, anxiety, depression, and suicide. The biggest revelation however is that isolation will in-fact weaken our immune system.

The doctors said: “The immune system is built by exposure to antigens: viruses, bacteria.” They continued: “This is immunology, microbiology 101. This is the basis of what we’ve known for years. When you take human beings and you say, “go into your house, clean all your counters—Lysol them down you’re gonna kill 99% of viruses and bacteria; wear a mask; don’t go outside,” what does it do to our immune system? Our immune system is used to touching. We share bacteria. Staphylococcus, streptococcal, bacteria, viruses.”

Effectively, by sheltering our immune system we become weakened against viruses and bacteria. This means when we do come out of lockdown we’re more vulnerable and will see a spike in infection.

CHECK OUT: Petty Democrats plot to disown State Rep. who praised President for saving her life.

A Conspiracy Against The People

The doctors continued: “When someone dies in this country right now they’re not talking about the high blood pressure, the diabetes, the stroke. They say they died from COVID. We’ve been to hundreds of autopsies. You don’t talk about one thing, you talk about comorbidities. COVID was part of it, it is not the reason they died folks. When I’m writing up my death report I’m being pressured to add COVID.”

When asked who is pressuring them and why the doctors said: “Why are we being pressured to add COVID? To maybe increase the numbers, and make it look a little bit worse than it is. We’re being pressured in-house to add COVID to the diagnostic list when we think it has nothing to do with the actual cause of death. The actual cause of death was not COVID, but it’s being reported as one of the disease processes and being added to the death list. COVID didn’t kill them, 25 years of tobacco use killed them.

Whatever your perspective, the models that predicted millions dead and the actual numbers don’t match-up. We need more doctors to come forward and reveal more truths because that is the only way we’re going to get answers.

CHECK OUT: China just donated $50-million to the World Health Organization despite paying less than that over the last two-years.