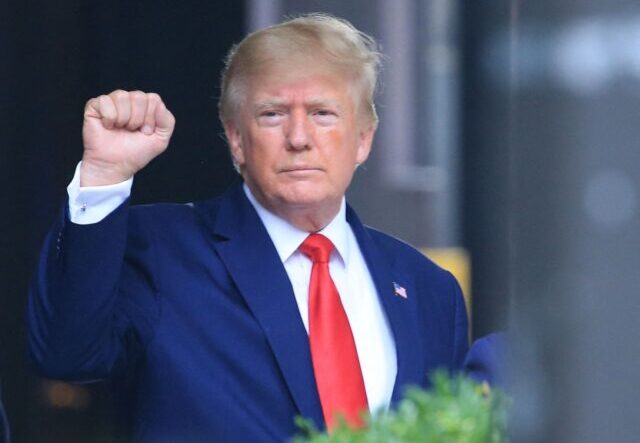 President Donald Trump on Friday ridiculed a report suggesting he had classified documents about nuclear weapons at his home at Mar-a-Lago, which prompted the FBI raid on Monday.

The Washington Post cited “people familiar with the investigation,” who claimed the FBI was searching Trump’s home for “classified documents relating to nuclear weapons.”

No other details were provided.

Trump explained he was still at war with federal law enforcement and the “same sleazy people” were involved in the raid.

He said his lawyers were not allowed to be present for the FBI operation.

“Why wouldn’t the FBI allow the inspection of areas at Mar-a-Lago with our lawyers, or others, present,” he asked. “Made them wait outside in the heat, wouldn’t let them get even close – said “ABSOLUTELY NOT.”

The former president also raised concerns the FBI was planting information on site, as some of his supporters have speculated.

“Planting information anyone?” he asked. “Reminds me of a Christofer (sic) Steele Dossier!

Some details of the raid are expected to be released after Attorney General Marrick Garland announced Friday the Department of Justice had filed a motion to unseal parts of the warrant, citing “substantial public interest” in the details.

“Not only will I not oppose the release of documents related to the unAmerican, unwarranted, and unnecessary raid and break-in of my home in Palm Beach, Florida, Mar-a-Lago, I am going a step further by ENCOURAGING the immediate release of those documents,” Trump wrote on social media Friday night.