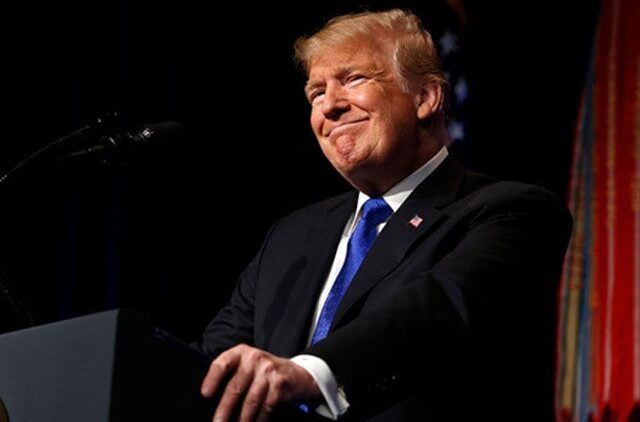 Kukkiwon President Lee Dong-seop visited Trump at Mar-a-Lago on November 20 “to bestow him the honorary ninth dan certificate and a set of Taekwondo wear,” according to the right-wing Dong-a Ilbo. “Dan” means “degree” in Korean. A “ninth Dan Black belt” is awarded to a Taekwondo practitioner who has attained the highest level of ability in the sport.

“I heard that the Donald Trump is highly interested in Taekwondo [sic],” Lee told reporters at the ceremony.

The martial arts representative said he requested Trump’s “continuous support and cooperation for Taekwondo and Kukkiwon” during their meeting. Trump received the Kukkiwon delegation after “a South Korean resident in the United States served as a bridge to enable their meetup,” the Dong-a Ilbo revealed.

“It is my pleasure and honor to receive this honorary certificate. Taekwondo is a great martial art for protecting oneself in these times (when COVID-19 prevails),” Trump told reporters on Saturday, referring to the ongoing Chinese coronavirus pandemic.

Trump, who served as the 45th president of the United States for a single term from January 2017 to January 2021, is rumored to possibly seek election to the office a second time in 2024. He alluded to this speculation on November 20, saying he “will wear the taekwondo suit in the U.S. Congress if he makes it back to the White House,” according to the Dong-a Ilbo.

Al Jazeera detailed the history of taekwondo on October 13 while reporting on a martial arts performance presented by North Korea’s military force, known as the Korean People’s Army, in Pyongyang on October 11.

“Korea has a long tradition of martial arts, including its indigenous sport of taekwondo – developed by a South Korean general who later fell out with the South’s military-backed leader Park Chung-hee and became a frequent visitor to Pyongyang, where he died in 2002,” the Qatari news outlet recalled.

“It is now often used by the North to symbolize its military prowess,” Al Jazeera noted of taekwondo.

The Korean People’s Army incorporated aspects of taekwondo into a martial arts show on October 11. The sensational performance — which included shirtless soldiers bending iron rods with just their necks and others smashing cinder blocks with bare fists — formed part of a larger weapons exhibition designed to demonstrate the “self-defense” capabilities of North Korea’s military, Pyongyang said at the time.