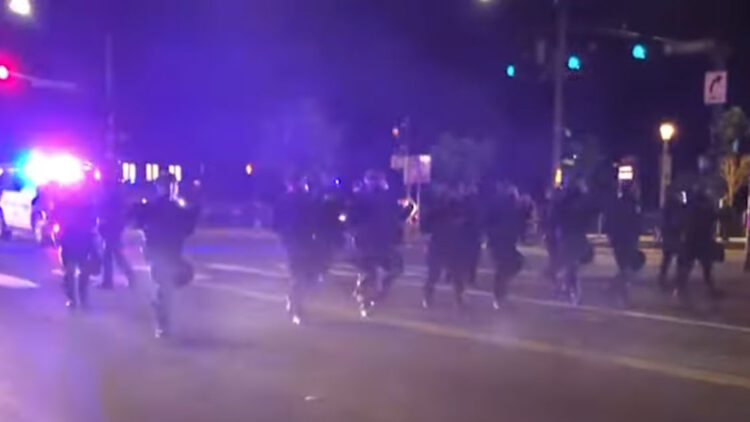 The mainstream narrative is that these federal forces are the President’s secret police or paramilitary and that they’re kidnapping people off the streets.

Clearly, the facts are ignored.

Yet, Rep. Maxine Waters, a sitting congresswoman is happy to go deep into a conspiracy rabbit hole on MSNBC.

She said: “As a matter of fact, it has been suggested that this is a trial run by the president of the United States who may be organizing to not accept what happens when we have the election if he’s not elected.”

That’s right, the circles she swims in suggest that this is a trial run for what happens if President Trump doesn’t win in November.

What’s bizarre is that no one seems to be laughing at her.

CHECK OUT: Watch riots continue in Portland and Seattle, along with proof that this is domestic terrorism.

What the mainstream news and Rep. Maxine Waters are happy to ignore is why President Trump’s federal forces have been deployed.

The reality is that President Trump is using federal forces to regain law & order in cities that have been taken over by domestic terrorists.

Anyone denying this fact is delusional.

These rioters are organized, targeting specific buildings, and clearly have harmful intent. Plus, the alleged Portland kidnappings are arrests.

Yet, none of the 50 nights of escalating violence is relevant to the mainstream news. The only thing that does matter is President Trump’s federal officers and what they mean for the future.

CHECK OUT: Portland Mayor rejects help from Homeland Security to bring back law & order, instead, he asks for help cleaning graffiti.

Here is the irony. Rep. Maxine Waters is part right. It is major Democrat-led cities who have the riots, and that President Trump’s federal forces will already be present in those cities.

Yet, the conspiracy portion of her comment is easily reversed by saying, if Democrat-led cities focused on having law & order, President Trump’s federal forces wouldn’t be present.

Or, and this is most likely, Rep. Maxine Waters is giving us all a prelude to what will happen when Democrats lose in November.

CHECK OUT: A teacher was fired for supporting President Trump’s push for kids to get back to school.