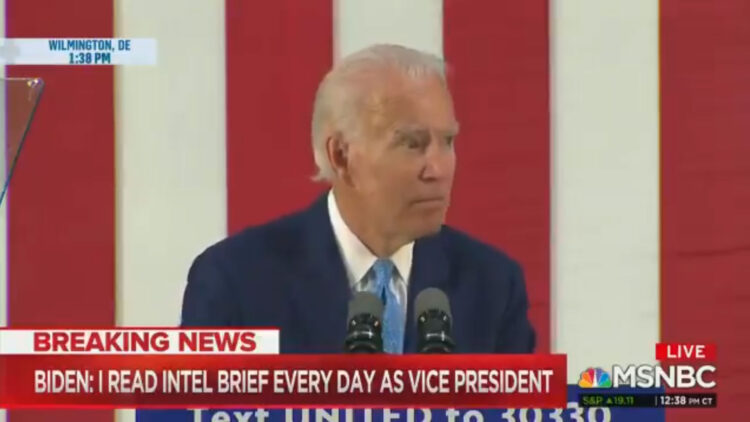 Delaware, Tuesday, June 30: Joe Biden stood in front of the press for the first time in three months, ready to take questions. If only he was standing in front of the same acid-tongued press that hammer President Trump almost on a daily basis, this muted and clearly staged event could have given America a chance to see Joe Biden in action.

Instead, Democrat Joe Biden was given a free pass by a unanimously left-leaning press. At one point Biden even accidentally admitted that he had a list of reporters to work through. Each of whom likely had pre-approved questions to match-up to Biden’s notes.

During the press conference, Biden said he was looking forward to the debates against President Trump. Which is a surprise considering Biden literally couldn’t answer a question without looking down at his notes throughout this conference.

The biggest takeaway any right-minded American could have had from the softball questions asked was that Joe Biden gets tested for cognitive decline constantly.

Considering the fact he couldn’t remember his home town newspaper during this press conference, plus all the other gaffes during his very limited 2020 Election campaign so far, it’s a surprise those cognitive tests haven’t revealed something because calling a black man, not black, isn’t something a sane person would say in 2020.

CHECK OUT: Joe Biden says between 33-million and 49-million Americans aren’t very good people. Ironically, in the same speech, he says the President is dividing the nation.

A Free Pass For Joe Biden

Ari Fleischer, a former White House Press Secretary, and current Fox News contributor wrote: “What wasn’t asked: 1) Anything about Biden’s role in authorizing surveillance against the Trump campaign 2) Do blue lives matter? 3) Should CHOP in Seattle never have been allowed? 4) will you prosecute those who destroy statues? 5) Should NYPD be cut $1 billion?”

Fleischer must have missed one of the responses from Biden as it pretty much answered questions #2, #3, #4, and #5.

Amongst all the softball questions that allowed Biden to read off his notes was one about the lawless pulling down of statues. In his response, Biden said it would be better if local governments took down Confederate statues but he admitted that he would not condemn those who are tearing them down.

If they’re not condemned, they’re supported, which in turn means the police aren’t being backed. So, clearly, you can tear down America and get away with it under Biden’s watch. Which answers Fleischer’s questions.

CHECK OUT: Joe Biden lied to a church full of community leaders, saying that if the President had listened to him about COVID-19 people wouldn’t have died. Yet the facts show Biden said nothing of the sort.