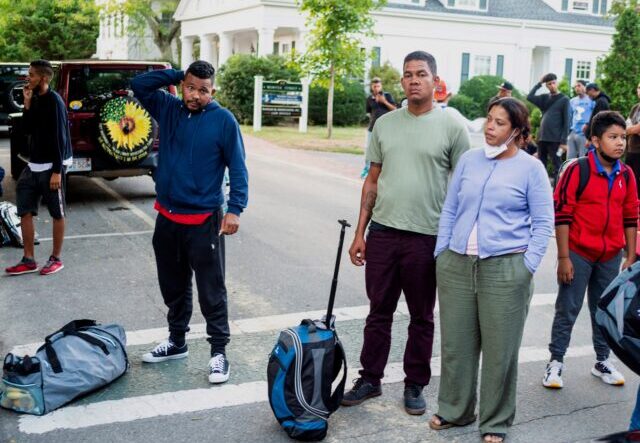 Immigrants gather with their belongings outside St. Andrews Episcopal Church, on Sept. 14, 2022, in Edgartown, Mass., on Martha's Vineyard. (Ray Ewing/Vineyard Gazette via AP)

The Democrat began by admitting there is a major issue on the southern border. However, that does not mean, according to Swalwell, open borders Democrats should have to deal with the ramifications of their policies in their own cities.

“Does America face a migration issue at our border because of poor economic and security conditions in countries south of us? Of course,” he said, accusing DeSantis of exploiting the crisis by sending illegal immigrants to blue areas that champion themselves as sanctuary areas.

“Should we exploit that crisis by using desperate humans as political pawns. Hell no. This is so sick,” he said, concluding that DeSantis is “soulless” for sending illegal immigrants to the elite island.

“It takes a soulless man to do this,” he lamented

Swalwell’s complaint follows the arrival of roughly 48 migrants to the Obamas’ favorite vacation spot. While other Republican governors, such as Texas Gov. Greg Abbott (R), have sent illegal immigrants to sanctuary cities such as New York City or Washington DC, this appears to be the first time anyone has sent illegals to the elite island.

The move is part of the Florida state legislature’s authorization of millions of dollars to relocate illegal immigrants. Notably, DeSantis once floated sending illegal immigrants to Martha’s Vineyard and President Biden’s Delaware as well.

“In yesterday’s budget, I put in $8 million for us to be able to transport people here illegally out of the state of Florida,” DeSantis announced in December 2021.

“It’s somewhat tongue in cheek, but it is true, if you sent them to Delaware or Martha’s Vineyard or some of these places, that border would be secure the next day,” he added, following through with his threat to take radical policies directly to the doorstep of these leftist elites.