Establishment Sen. Lisa Murkowski Laments ‘I May Not Be Re-Elected’ 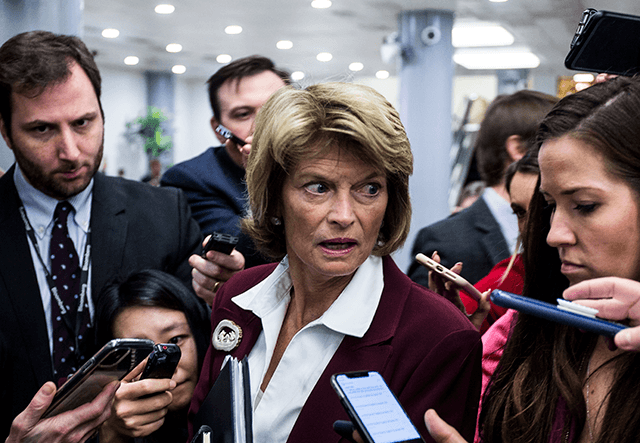 “I may not be re-elected,” Murkowski told the New York Times about the possible end of her 20-year Senate career.https://027c5a5a2afc0b3fbf1c9486ae2b2113.safeframe.googlesyndication.com/safeframe/1-0-38/html/container.html

“It may be that Alaskans say, ‘Nope, we want to go with an absolute, down-the-line, always, always, 100-percent, never-question, rubber-stamp Republican,’ she said about Tshibaka who is leading in the polls.

“And if they say that that’s the way that Alaska has gone — kind of the same direction that so many other parts of the country have gone — I have to accept that,” Murkowski added. “But I’m going to give them the option… Maybe I am just completely politically naïve, and this ship has sailed. But I won’t know unless we — unless I — stay out there and give Alaskans the opportunity to weigh in.”

Murkowski’s worries come as Tshibaka has picked up steam heading into the August 16 GOP primary. Tshibaka has won the endorsement of the Alaskan Republican Party and scored Trump’s endorsement. Polling is also favorable for Tshibaka.

Conducted from March 14 to March 16, the survey of 500 likely voters in Alaska’s November general election found Tshibaka in the first round with a huge lead of more than double digits over Murkowski. On that first choice on the ballot, Tshibaka comes in with 45.4 percent and Murkowski at just 28.7 percent—with a generic Democrat close behind Murkowski and a libertarian candidate in fourth place. The poll’s margin of error is 4.21 percent.

Tshibaka, who has dubbed her establishment opponent the “Murkowski monarchy” due to her father holding the Senate before her, has spoken against Murkowski’s vote to confirm President Biden’s Supreme Court nominee, Ketanji Brown Jackson. Tshibaka has also voiced her displeasure with Murkowski’s vote to impeach Donald Trump.“The long guessing game is over, and the unsurprising answer is that Lisa Murkowski is supporting a leftist judicial nominee who will write legislation from the bench and have the very real potential for harming Alaska for decades to come,” Tshibaka explained.

“It’s time for a change. We feel forgotten,” Tshibaka told supporters in April. “We feel unheard, and we don’t feel like these votes and decisions represent us.”

Murkowski is one of many establishment Republican members of Congress who boast of the support of the Washington, DC, establishment. Sen. Mitch McConnell (R-KY) has endorsed Murkowski as an important Republican who opposes American First policies. It is unclear how important McConnell’s endorsement is. McConnell is the least popular Republican Senator.

“It’s important for Lisa to be reelected. She’s one of the few sort of moderates in the middle of the Senate,” McConnell told Axios in April. “We’re going to do everything we can to make sure she’s successful.”