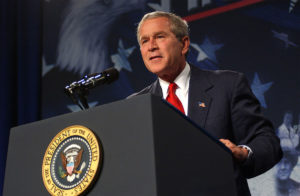 In 2005, President George Bush told the National Institute of Health how a pandemic would impact the United States. His government then built a stockpile of supplies that President Obama partially depleted and never replenished.

The former President compared it to a forest fire: “If caught early, it might be extinguished with limited damage. If allowed to smolder, undetected, it can grow to an inferno that can spread quickly beyond our ability to control it.”

In hindsight, President Bush was right to prepare.

CHECK OUT: Resilient WWII veteran beats COVID-19 in time for his 104th birthday.

What President Bush did?

In the summer of 2005, the President read historian John M. Barry’s book The Great Influenza. A book that told the story of the 1918-1920 Spanish Flu epidemic that infected a quarter of the world’s population and killed an unknown amount, somewhere between 20 and 50 million people.

The President took what he read seriously and told his homeland security adviser Fran Townsend: “Look, this happens every 100 years. We need a national strategy.”

Many were doubtful regarding President Bush’s direction but over the next three years, the government built a comprehensive pandemic plan. Including plans for a global early warning system, a robust national stockpile of critical supplies, such as face masks and ventilators, plus funding to develop rapid vaccine technology.

Townsend said: “He (President Bush) said to me, ‘It may not happen on our watch, but the nation needs the plan.”

Unfortunately, not every President looks at their term thinking about the legacy they leave for the next.

What President Obama didn’t do?

President Obama, who took office in January 2009 signed the American Recovery and Reinvestment Act in February. It put $800 billion dollars into the economy, $0 into pandemic preparation.

Maine Senator and Republican Susan Collins was the one who pushed the $0 agenda, yet President Obama agreed to it.

By April 2009, the H1N1 swine flu had caused 274k hospitalizations and 12.5k deaths. It was an outbreak that depleted the stockpile of N95 respirator masks in the United States.

During his terms, President Obama was recommended to replenish the stockpile by a federally backed task force and a safety equipment organization.

In eight years of Presidency, the Obama administration never replenished the stockpile and now President Trump is getting the brunt of that blame.

CHECK OUT: Hospital executive fired after saying Trump supporters should go to church and catch COVID-19.

For three years President Trump has been fighting a partisan mainstream media and a feral democratic party. In that time the President has put America first in trade, immigration, and more.

He’s fighting the same battle again, invoking the Defense Production Act to force General Motors to build ventilators and 3M to produce N95 masks exclusively for the United States. Yet, like Obama, the President had years to replenish stocks missing in The Strategic National Stockpile and didn’t.

The big question is, did the President know that the N95 mask supply was depleted?

On March 26, during a White House COVID-19 briefing, President Trump said: “We took over an empty shelf. We took over a very depleted place, in a lot of ways.” If they were depleted, why wasn’t the President made aware before this pandemic?

According to NPR science correspondent Nell Greenfieldboyce, who visited one of the Strategic National Stockpile warehouses in June 2016, only seven months before President Trump took office, the shelves were full: “A big American flag hangs from the ceiling, and shelves packed with stuff stand so tall that looking up makes me dizzy.”

In the same Fact Check report, buried in the post the following is included:

It’s true that some of the supplies in the stockpile that governors are currently asking the government to send to states were not completely restocked during Obama’s presidency.

Even the Washington Post reported on March 10 that supplies of the N95 respirator masks were not replenished after the N1H1 outbreak.

It seems the shelves were full but not with the supplies needed to tackle the COVID-19 pandemic. Missing masks and ventilators could easily be missed amongst the otherwise full warehouses.

Whatever the scenario regarding national stockpiles, it is clear only President Bush took the risk of a pandemic seriously. President Trump should have acted sooner. The irony is, he tried.

On January 31st, one day after the World Health Organization first declared that COVID-19 was transmittable between humans, President Trump banned all flights from China into the United States.

Then in his State of the Union Address on February 4, the President spoke about the coronavirus threat. The moment he finished, House Speaker Nancy Pelosi tore up his speech in a rage and called it a “manifesto of mistruths.” The threat he spoke about ignored, instead, Pelosi’s antics took the headlines.

Perhaps if the government worked together, rather than focusing on theatrics and political point-scoring this nation could save more lives from COVID-19. Everyone in government is to blame for this mess, yet it seems only President Trump is on the receiving end.