Fans Claim Thor Is ‘Gay as Hell’ After ‘Love and Thunder’ Trailer Reveal: ‘Thor Is Gay! We Won’ 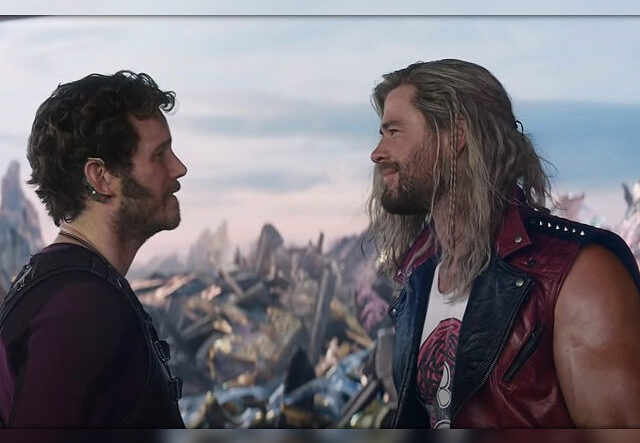 Fans are claiming Marvel superhero Thor is “gay as hell” after the trailer for Thor: Love and Thunder was revealed on Monday. “THOR IS GAY !!!!!!!! WE WON,” another fan exclaimed.

At one point in the film’s trailer, Thor (Chris Hemsworth) is seen staring –or, at least he’s trying to — into the eyes of Star-Lord (Chris Pratt), which caused some fans to question Thor’s sexuality.https://3b547461e51052cd138c83a2be7f4a09.safeframe.googlesyndication.com/safeframe/1-0-38/html/container.html

“Remember what I told you, if you ever feel lost: just look into the eyes of the people that you love,” Pratt’s character says to Hemsworth’s character in the trailer, to which Hemsworth reacts by staring directly into Pratt’s eyes.

Fans took to Twitter to express their excitement over the idea that Thor may be having a “gay awakening” in the new film.

“‘look into the eyes of the people you love’ oh thor you gay as hell,” one Twitter user reacted.

“thor: love & thunder is a gays only event,” another tweeted.

“the words in the title r literally the colours of the gay flag gay thor is so Real,” another Twitter user wrote.https://3b547461e51052cd138c83a2be7f4a09.safeframe.googlesyndication.com/safeframe/1-0-38/html/container.

“Anyone saying Thor isn’t gay is in homophobic denial,” another claimed.

“fact of the day: in the taika cinematic universe there are no straight characters!” another commented.

“People are actually so mad at the thought Thor might be gay. That boys a God, he’s definitely dabbled,” one Twitter user reacted.

“thor has always been gay guys taika just made it more obvious,” another Twitter user insisted.

While fans speculate about Thor’s sexuality in the upcoming film, it is no secret that today’s entertainment has been inundated with LGBTQIA2S+ content in recent years.

In 2020, Lifetime has announced it would release its first-ever Christmas movie featuring a gay couple as the film’s lead. That same year, Disney-owned Pixar Animation Studios unveiled its first-ever gay main character in a short Disney Plus film called Out.

Last year, Disney put the “proud” in its The Proud Family kids show with a woke reboot of the popular series that featured gay fathers.

In March, a gay kiss was restored to the final cut of Pixar’s upcoming animated film Lightyear after LGBTQIA2S+ employees and their allies complained that Disney executives had censored “overtly gay affection” in the company’s films.