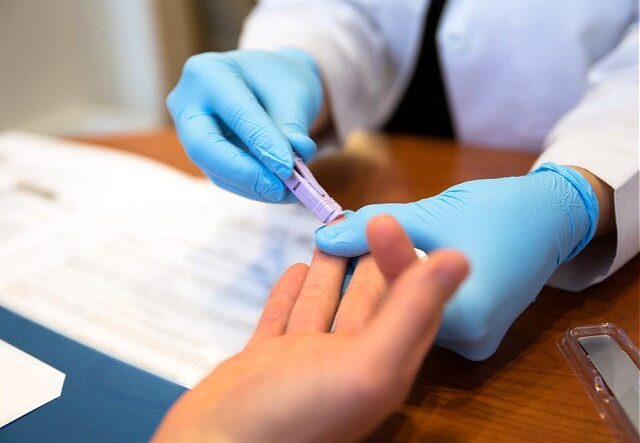 A research team reported Tuesday that a woman with leukemia has possibly been cured of HIV after receiving an umbilical cord blood transplant from a donor who is naturally resistant to the virus.

The case of a middle-aged woman of mixed race, presented at the Conference on Retroviruses and Opportunisitic Infections in Denver, is also the first involving umbilical cord blood, a newer approach that may make the treatment available to more people.

Since receiving the cord blood to treat her acute myeloid leukemia – a cancer that starts in blood-forming cells in the bone marrow – the woman has been in remission and free of the virus for 14 months, without the need for potent HIV treatments known as antiretroviral therapy.

Timothy Ray Brown was the first man to be deemed successfully cured of HIV after receiving a stem cell transplant, and his case came to light in 2008, NBC reports. Brown also had acute myeloid leukemia and, according to the New York Times, received a bone marrow transplant from a donor “who carried a mutation that blocks H.I.V. infection.” The same treatment was given to the other HIV-cured patient Adam Castillejo, whose case was reported in 2019.

This therapeutic process is meant to replace an individual’s immune system with another person’s, treating their cancer while also curing their HIV. First, physicians must destroy the original immune system with chemotherapy and sometimes irradiation. The hope is that this also destroys as many immune cells as possible that still quietly harbor HIV despite effective antiretroviral treatment. Then, provided the transplanted HIV-resistant stem cells engraft properly, new viral copies that might emerge from any remaining infected cells will be unable to infect any other immune cells.

It is unethical, experts stress, to attempt an HIV cure through a stem cell transplant — a toxic, sometimes fatal procedure — in anyone who does not have a potentially fatal cancer or other condition that already makes them a candidate for such risky treatment.

Though the treatment has seemingly cured three people, a number of transplants in other cases were failures, and both Brown and Castillejo endured gruesome side effects from the invasive bone marrow transplants, according to the New York Times and NBC. The men suffered from graft versus host disease following treatment, where “the donor’s cells attack the recipient’s body,” the Times reports. Brown nearly died following the bone-marrow transplant, and Castillejo lost close to 70 pounds, battled multiple infections, and lost hearing.

The woman dubbed the “New York patient,” as she chooses to remain anonymous, was diagnosed with leukemia in 2017, four years after her HIV diagnosis in 2013, NBC reports. She is called the “New York patient” because she received treatment at New York-Presbyterian Weill Cornell Medical Center in New York City.

She was given the umbilical cord blood transplant in August of 2017 and was out of the hospital 17 days after the procedure, according to the Times. She did not come down with graft versus host disease like Brown and Castillejo. As it takes up to six weeks for the cord cells to engraft, she was also given blood stem cells from a first-degree relative.

“The transplant from the relative is like a bridge that got her through to the point of the cord blood being able to take over,” said Dr. Marshall Glesby, who is an infectious disease expert at Weill Cornell Medicine.

Just over three years after the transplant, the “New York patient” opted to discontinue the antiretroviral treatments, and another 14 months later, she had no trace of detectable HIV antibodies, the New York Times reports.

It is not apparent why the cord cells appear to work better than adult stem cells, but Dr. Koen Van Besien, director of transplants at Weil Cornell, says it is possible because newborn cells are more adaptable, per the Times.