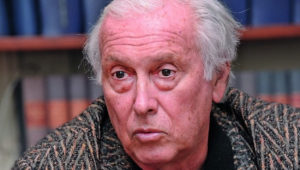 U.S. obesity and COVID-19 don’t mix according to a French professor. In an interview, he said the United States will be hit hardest because of its weight problem.

Professor Jean-François Delfraissy, France’s chief epidemiologist said to FranceInfo radio: “This virus is terrible, it can hit young people, in particular obese young people. Those who are overweight really need to be careful.”

The Professor then picked out the United States: “That is why we’re worried about our friends in America, where the problem of obesity is well known and where they will probably have the most problems because of obesity.”

This isn’t new information. The CDC has been saying it from the start but new fear-mongering headlines get clicks.

CHECK OUT: The Daily Rant with Steve Sanchez. A daily podcast that’s Christian, conservative, and controversial.

We’re not scientists, but those numbers say 1 in 7.5 die from COVID-19 in France, whereas 1 in 29 die from COVID-19 in the United States — and that’s with the CDC telling hospitals to mark deaths down to COVID-19, even if the person was never confirmed as having the virus.

Picking on U.S. obesity as France’s death total was crossing the 10,000 milestone and accelerating looks like an attempt to redirect the spotlight, rather than a friendly warning.

Can’t we just agree, COVID-19 doesn’t discriminate and any amount of deaths, whether in France or the United States is too many?

CHECK OUT: The CDC tells hospitals to list cause of death as COVID-19 even if the person wasn’t confirmed as having the virus.

The Professor, a man of science, packaged the reasons people are dying into the easy target of obesity. It’s understandable, everyone else is doing the same. Picking on the fat kid, the one group of people we can still point at, laugh at, and blame, without recourse, is an easy out in a difficult situation.

What’s not said is that the problem itself isn’t as the CDC says “body mass index [BMI] of 40 or higher”, but the underlying conditions it causes in some, like type 2 diabetes and asthma.

Fortunately, some Medical Doctor’s are being honest about U.S. obesity.

Stacy Brethauer, MD, wrote on the Ohio State Wexner Medical website: “While I haven’t seen any data identifying obesity as an independent risk factor or predictor for hospitalization or mortality with COVID-19, it stands to reason that people with obesity would be at higher risk because of their underlying diseases that are strongly associated with obesity.”

She added: “In general, patients with severe obesity are a more challenging population to manage in the intensive care setting, and may struggle to recover if they develop any severe illness, particularly a respiratory infection like COVID-19.”

So, if you’re obese, you are likely to have an underlying condition and because you’re harder to manage in intensive care, it’s best to put you on the ‘at risk’ list and scare you into isolation. Especially when, U.S. obesity for over 20s is almost 40% of the total population.

Here’s the problem, people aren’t singling out those with heart conditions or those who are immunocompromised in headlines. Just obese people. Yes, U.S. obesity is a problem but there’s no need to panic over one-third of the countries population, especially if it drives them away from seeking medical help if they genuinely need it.

CHECK OUT: How the hate attack on President Trump is out of control.