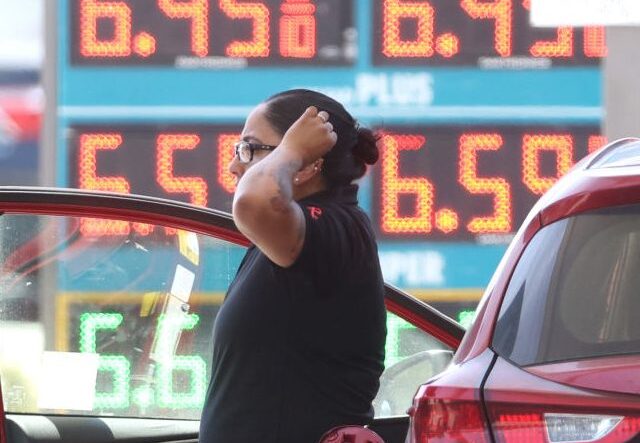 Gas prices continued to soar after Memorial Day weekend to a record high of $4.62, up 44 cents from last month and 52 percent from a year ago, AAA data shows.

Gas prices have become so costly that drivers in California, Oregon, Nevada, Alaska, Hawaii, Washington, and Illinois are paying over $5 per gallon. Eleven states, including New York, Connecticut, and Arizona, are paying just under $5 per gallon.

In total, drivers in 18 states are paying about $5 per gallon.

“With expectations of strong driving demand … US retail price could surge another 37% by August to a $6.20/gal national average,” said the head of commodities research at JPMorgan, Natasha Kaneva.

“Motorists have not done much to burn a lot less gasoline,” the Times wrote in an article entitled, “Gas Prices Hit New Highs as Summer Driving Season Starts.”

The article also suggested gas prices may be a positive predicate to force American drivers to purchase expensive green vehicles.

“Oil industry executives have often said the cure for high prices is those very high prices. That’s because they force consumers to buy less fuel or switch to more fuel-efficient cars. But drivers do not seem to be cutting back or making other big changes — at least not yet,” the article read.

The high gas prices have impacted Americans’ view of President Joe Biden’s economy. According to Gallup polling, only one percent of Americans say the economy is “excellent.” Eighty-five percent said the economy was either “poor” or “only fair.”