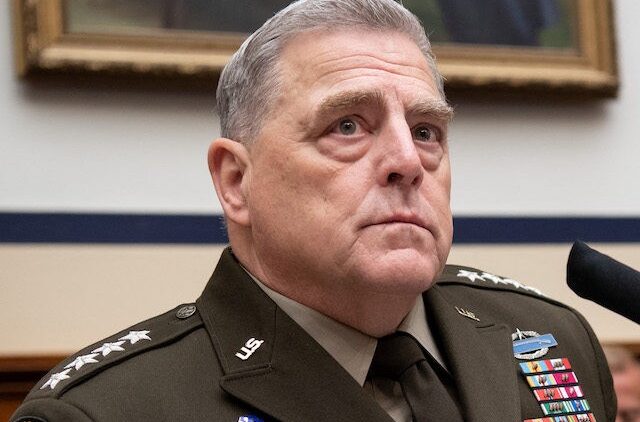 Chairman of the Joint Chiefs of Staff Army Gen. Mark Milley was allegedly so worried that then-President Donald Trump might attempt a coup after the presidential election last year that he and other service chiefs discussed a plan to resign rather than carry it out, according to reports about a forthcoming book by two Washington Post reporters.

“This is a Reichstag moment… The gospel of the Führer,” Milley told aides, according to CNN, which obtained advance excerpts of the book I Alone Can Fix It by Post reporters Carol Leonnig and Philip Rucker.

Milley was worried Trump was stoking unrest in the days before the January 6 riot and that he would use it as an excuse to invoke the Insurrection Act and “call out the military,” according to CNN.

Milley also reportedly told aides ahead of a pro-Trump “Million MAGA March” in November that he feared it could be the “modern American equivalent of ‘brownshirts in the streets,’” referring to the pro-Nazi militia supporting Hitler’s rise.

Breitbart News reached out to Milley’s spokesman for comment on Wednesday afternoon but did not receive a response.

However, a defense official “close to the general” told CNN that Milley will not publicly address the book, and did not dispute that Milley “engaged in activities and communications that are not part of the traditional portfolio of a chairman in the final days of Trump’s presidency.”

The official did say, however, that Milley is “not going to sit in silence while people try to use the military against Americans,” and that while he “‘tried his hardest to actively stay out of politics,’ if the events that occurred brought him into that arena temporarily, ‘so be it.’”

The official said Milley was not calling Trump a Nazi but felt he had no choice but to respond given his concerns that the rhetoric used by  Trump and his supporters “could lead to such an environment,” according to CNN.

Milley is reportedly quoted extensively in the book and comes off in a “positive light as someone who tried to keep democracy alive.”

According to the book, Milley also warned then-White House Chief of Staff Mark Meadows about firing FBI Director Christopher Wray and CIA Director Gina Haspel, and after January 6, had a daily conference call with then-Secretary of State Pompeo and Meadows to compare notes and “survey the horizon for trouble.” Pompeo, through a person close to him, denied making comments attributed to him in the book and said they were not reflective of his views.

The book also details a private conversation with House Speaker Nancy Pelosi (D-CA) and Milley after Trump fired Defense Secretary Mark Esper after the election. “We are all trusting you,” she reportedly said. “Remember your oath.” After January 6, they reportedly discussed Trump potentially using nuclear weapons during his final days in office.

Milley also reportedly disparaged far-right groups in advance of President Joe Biden’s inauguration, telling a group of senior leaders: “Here’s the deal, guys: These guys are Nazis, they’re boogaloo boys, they’re Proud Boys. These are the same people we fought in World War II. We’re going to put a ring of steel around this city and the Nazis aren’t getting in.”

Vice President Kamala Harris reportedly personally thanked Milley: “We all know what you and some others did.”

The book concludes with Milley describing relief there had not been a coup, telling Michelle Obama at the inauguration: “No one has a bigger smile today than I do. … You can’t see it under my mask, but I do.”

Milley has become the subject of national controversy, after defending teaching critical race theory in the military during a House Armed Services Committee hearing last month.