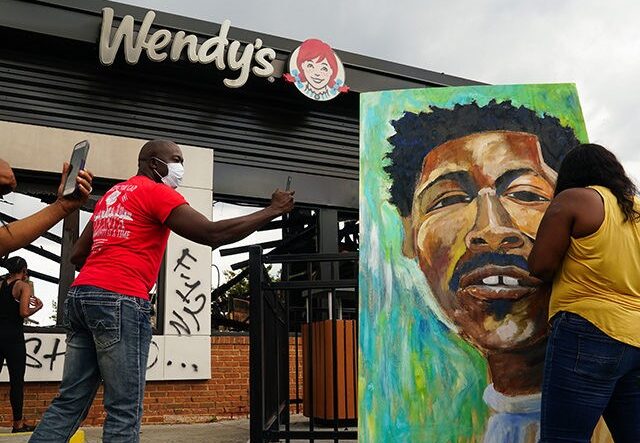 Brooks, 27, a black man, had fallen asleep in his vehicle in a Wendy’s drive-thru and was questioned by the officers, who had been called to the scene. After speaking with the officers, he resisted arrest and stole an officer’s Taser, firing it at them. Rolfe fired at Brooks, who was killed.

A mob then arrived and burned the Wendy’s. Democrats, including failed Georgia gubernatorial candidate Stacey Abrams, said the shooting was “murder.” Celebrities, such as Justin Timberlake, joined in condemning police.

One of the officers’ stepmother was fired from her job. The then-Fulton County district attorney said that police officers ought to be indicted without a grand jury investigation. And the media reported yet another example of alleged racist police brutality.

Brooks joined the ranks of George Floyd and Breonna Taylor among the iconic victims of the Black Lives Matter movement.

But special prosecutor Peter Skandalakis declared Tuesday, in clearing the officers of any crimes, that the shooting had been justified under the circumstances, and that both officers had followed the law and department policy.

“Both acted as reasonable officers would under the facts and circumstances of the events of that night,” special prosecutor Peter Skandalakis said. “Both acted in accordance with well-established law and were justified in the use of force regarding the situation.”
…

“Was it objectively reasonable that (Rolfe) can use deadly force? We determined it was,” Skandalakis said.
…

“Black lives do matter,” Skandalakis said. “I understand that the encounters between police and the African American community at times are very volatile. But I would ask them to look at the facts of this case, and this isn’t one of those cases. This is a case in which the officers were willing to give Mr. Brooks every benefit of the doubt and unfortunately, by his actions, this is what happened.”

The Atlanta Journal-Constitution reported Tuesday that lawyers for the Brooks family plan to file civil lawsuits against the officers. Both of the officers are still on the Atlanta Police force and will be allowed to resume duties after repeating training.