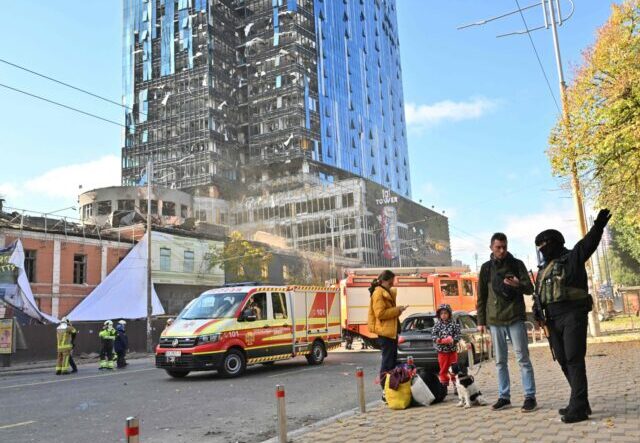 Local residents and rescuers (L) stand outside a partially destroyed multistorey office building after several Russian strikes hit the Ukrainian capital of Kyiv on October 10, 2022, amid Russia's invasion of Ukraine. - The head of the Ukrainian military said that Russian forces launched at least 75 missiles at Ukraine on Monday morning, with fatal strikes targeting the capital Kyiv, and cities in the south and west. (Photo by Sergei SUPINSKY / AFP) (Photo by SERGEI SUPINSKY/AFP via Getty Images)

A building housing the visa office of the German consulate in Kyiv (Kiev) has been struck amid a wave of Russian strikes across Ukraine, reports claim.

Germany’s BILD, the best-selling tabloid newspaper in Europe, cited former Heinrich Böll Foundation chairman Sergej Sumlenny that the “building where the visa office of the German embassy in Kyiv was located was hit by the Russians” in Monday’s missile strikes.

Sumlenny tagged Germany’s Chancellor Olaf Scholz, Foreign Minister Annalena Baerbock, and the Ministry of Defence in his social media post, suggesting that “[m]aybe some Leopards can be sent to check the situation on the ground” — a reference to the Leopard 2 main battle tank which serves as the mainstay of German armoured capacity.

Deutsche Welle (DW), a BBC-like tax-funded German media organisation, has also reported on the visa office being caught up in the strikes.

Infrastructure in Kyiv and other major cities far from the Ukrainian frontlines received heavy damage on Monday, with many believing the strikes to be retaliation for a blast which destroyed part of the Kerch Bridge between Crimea and mainland Russia at the weekend, which the Ukrainians celebrated even if they did not definitively claim responsibility for it.

“If acts of terrorism continue against Russia, we will respond in a very harsh manner,” declared Russia’s President Vladimir Putin in televised remarks following the strikes.

“The responses will be of the same scale as the threats to Russia. Nobody should have any doubts about this,” he warned.

“So, russkies, you really think you can compensate for your impotence on the battlefield with missile strikes on peaceful cities?” responded Ukraine’s Ministry of Defence, in a combative mood after advances in Donbas and the southern Kherson region following Russia’s rout from occupied territory near Kharkiv (Kharkov).

“You just don’t get it do you – your terrorist strikes only make us stronger. We are coming after you,” the Ukrainians vowed.