WATCH: The Mainstream Media Gets Shredded By GOP Governor Who Didn’t Put State Into Draconian Lockdown 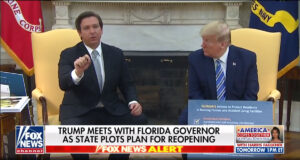 It’s the mainstream media’s worst nightmare: A GOP Governor who goes against the fear narrative and comes out on top, proving the draconian and non-constitutional lockdown wasn’t the only solution to flattening the COVID-19 curve.

It was double-trouble for the mainstream media because not only did Republican Governor Ron DeSantis of Florida hit back with facts, he did it next to the President who never holds back when it comes to tackling the press.

Gov. DeSantis has been constantly attacked by the media for not implementing a draconian statewide lockdown. With media predictions saying Florida would have deaths similar to Italy and New York.

While at the White House, the Governor was asked about the criticism he faced and reacted by shredding the media’s narrative.

The Governor said: “You look at some of the most draconian orders that have been issued in some of these states and compare Florida in terms of our hospitalizations per 100,000, in terms of our fatalities per 100,000, I mean you go from D.C., Maryland, New Jersey, New York, Connecticut, Massachusetts, Michigan, Indiana, Ohio, Illinois, you name it. Florida has done better.”

The Governor said in a separate interview: “One of the newspapers in Florida said we would have 464,000 people hospitalized. The actual number is 2,200. So we beat that by 462,000. But what we did very early was focus on the populations who are most at risk – our senior citizens, and particularly our nursing homes and assisted living facilities.”

The Governor all along has been explaining his approach but it’s only now when Florida is reopening that he can hit back against the mainstream media.

The Gov. explained: “What we did very early was focus on the populations who are most at risk – our senior citizens, and particularly our nursing homes and assisted living facilities.”

Clearly, Florida’s solution was to protect the vulnerable rather than lockdown everybody and crush the constitution.

The Gov. continued: “I charged the National Guard with doing strike teams and spot testing at the facility to try to figure out if any of the staff are asymptomatic. Whenever there was an incident at a nursing home, we send these quick response teams to go and try to limit some infections … We’ve put out almost six million masks just to our nursing homes and assisted living facilities and so we understood the risk that this posed to the senior population.”

Rather than listening to the fear and hysteria, Gov. Ron DeSantis is now in a position to reopen Florida.

He stated: “We understood we have a big, diverse state, we understood the outbreak was not uniform throughout the state, and we had a tailored and measured approach that not only helped our numbers be way below what anyone predicted, but also did less damage to our state going forward.”

The Governor concluded: “I am now in a situation where I have less than 500 people at a state of 22 million on ventilators as of last night, and I have 6,500 ventilators that are sitting idle, unused throughout the state of Florida.”

Watch the highlights of the White House visit below: