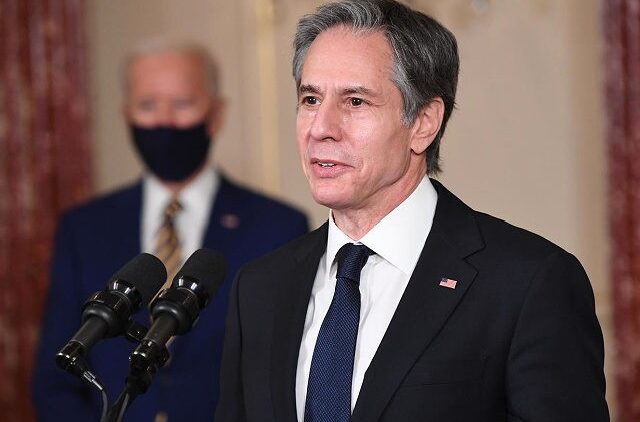 The Republican Study Committee (RSC) called out the “weaknesses” of the Biden administration’s policy towards communist China this week, in part, by exposing the ties between several political appointees, including Secretary of State Antony Blinken, and Beijing.

Ahead of the push, Breitbart News’ Matt Boyle exclusively learned from RSC Chairman Jim Banks (R-IN) that the panel is launching a legislative blitz starting Tuesday against Biden to expose his weaknesses in combating the threat posed by China.

A six-page memo issued by the RSC suggested that the link between the Chinese Communist Party (CCP) and Secretary of State Antony Blinken, a long-time Biden confidant now charged with carrying out the U.S. foreign policy agenda, may prompt a conflict of interest when it comes to confronting China.

In describing the links between several Biden picks for influential political positions and China, the RSC chaired by Rep. Banks noted in its memo:

Blinken was the co-founder of the consulting company WestExec Advisors, which according to the Washington Free Beacon, “helped U.S. universities raise money from China without running afoul of Pentagon grant requirements.”

Some of the firm’s work appeared to have U.S. national security implications.

Among other Biden political appointees who did work for the firm is Director of National Intelligence (DNI) Avril Haines, the head of the U.S. intelligence community, and press secretary Jen Psaki, the RSC noted.

The panel also accused Bidens’ U.S. Ambassador to the U.N. Linda Thomas Greenfield, a State Department employee with a “history of troubling comments praising and welcoming China’s role in Africa,” of being cozy with Beijing.

In early December 2020, the Washington Free Beacon reported that the Washington, DC-based WestExec firm scrubbed details of its work on China from its website. The move came as the firm’s businesses drew scrutiny after Biden won the presidency.

“The company deleted references to such work from its website between July 26 and August 2, weeks before Biden accepted his nomination at the Democratic National Convention in late August,” the Beacon explained.

Citing an archived version of a West-Exec site, the Free Beacon further noted that the firm worked to help:

During his Senate confirmation hearing on January 19 and afterward, Blinken lauded former President Donald Trump for being “tougher” on China, suggesting that the current administration would embrace at least some components of its predecessor’s policy towards Beijing.

Blinken stressed that Biden would seek to work with China on mutual interest matters such as climate change, a departure from the previous administration.

However, the RSC reported:

Despite tough talk on China, such as Secretary Blinken saying that Trump was right to take a tougher approach to China, the Biden administration’s actions have shown they will do the opposite.

Fundamentally, the Biden administration’s approach to China reflects much of the failed policies and failed team of the Obama administration, which saw China not as a competitor, but [as] a nation that could be engaged on a whole host of issues from climate change to global development.

Rather than pushing China out of key regions such as the Middle East or Africa, the Biden team welcomes Chinese expansion in these areas and believes in the old failed “win-win” approach of cooperation with the CCP, which threatens international security and undermines our alliances. The CCP is seeking to fundamentally reorder the international system in its image based on Communist authoritarianism. The U.S. cannot afford to return to leading from behind and the failed policies of the past.

Blinken has repeatedly stressed that while China poses the most significant challenge of any nation-state to the United States, there are areas where Washington could cooperate with Beijing.

“There are, as I see it, rising adversarial aspects to the [U.S.-China] relationship, certainly competitive ones, and still some cooperative ones when it is in our mutual interests,” he testified during his confirmation hearing

During his confirmation hearing, Blinken endorsed his predecessor’s determination that China is committing genocide against its Muslim Uighur minority in Xinjiang.

Soon after Blinken’s comments, however, the White House had an about-face. It announced that the State Department is undertaking a review of Pompeo’s historical determination that Uighurs are genocide victims.

The Biden administration reportedly argues that “proper procedures were not followed” by the Trump administration “that would uphold” the determination that China is committing genocide, the RSC report added, a claim denied by former Trump officials.

In early February, Blinken announced that the U.S. is rejoining the United Nations Human Rights Council, known to permit violators such as China, Russia, Venezuela, and Cuba, to gain representation.

“A number of its members have used the council to legitimize their terrible human rights records,” the RSC pointed out.