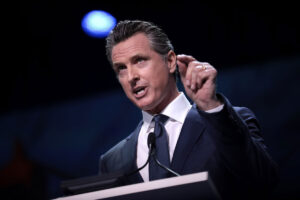 A governor who gave the government an ultimatum, give us more money or first responders will be the first laid off, has followed it up by giving millions to illegal aliens.

May 17, on CNN’s State of the Union, California’s Governor, Gavin Newsom said: “It’s a social responsibility at a time when states large and small [ are] facing unprecedented budgetary stress. It is incumbent upon the federal government to support the states through this difficult time.”

In other words, give us money.

And now for the ultimatum.

He continued: “I hope they’ll consider this next time they want to salute and celebrate our first responders … consider the fact that they will be the first ones laid off by cities and counties.”

That is if, they don’t get the money required.

May 18, just one day later, Governor Gavin Newsom’s plan to give $500 per adult, capped at $1,000 per household to undocumented immigrants living in the state rolls out.

In a tweet, CNN’s State of the Union writes: “CA Gov. Gavin Newsom says his state’s budget deficit is directly related to the coronavirus pandemic and federal funding should not be looked at as charity, “when it’s fundamental purpose of government is to protect people’s safety and to protect their well-being.”

So, Gov. Newsom can threaten to cut first responder jobs, those who are on the front line protecting people’s safety while paying out $75 million to illegal aliens who are in America unlawfully. Yet, he knows it’s the government’s purpose to protect…

What adds to the irony is that in The Hill, they report Newsom as saying: “Lawmakers have a “moral and ethical obligation” to help Americans across the country.”

Surely keeping first responders is a higher priority than anything during this period of unrest and social disruption?

Leveraging first responder jobs as part of an ultimatum to get more money shows the state’s wayward priorities, proving that helping Americans is clearly not at the top of their list.

Trial lawyer Harmeet K. Dhillon tweeted regarding Newsom’s illegal alien plan: “We went to the California Supreme Court to stop this because it violates state and federal law and constitution, but the court allowed it to proceed. Remember our government’s priorities as this shutdown, and your misery continues in California.”

So it’s an illegal plan, for illegal aliens. The irony doesn’t never seems to stop in California.

In total, $125 million will be paid out in Newsom’s plan, $75 million will come directly from the state. The other $50 million is expected to come from philanthropic groups.

CHECK OUT: Joe Biden, the second most reviled amongst Secret Service agents.