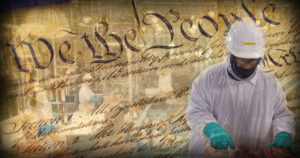 The South Dakota Republican Gov. Kristi Noem, who has put the constitution before “experts,” and chose not to lock down the state is again in the cross-hairs of the mainstream media.

Gov. Noem said: “Our constitution ensures that the citizen’s right is protected, I agree with the role of our government as set forth in our state and in our national constitution. I took an oath to uphold these constitutions. My role with respect to public safety is something I take very seriously, the people themselves are primarily responsible for their safety. They are the ones that are entrusted with expansive freedoms – they are free to exercise their rights to work, worship, and play – or to stay at home, or to conduct social distancing.”

Whether you agree or not, standing by the constitution and giving citizens the freedom to choose is very American.

The Governor, who has been repeatedly chastised for not locking down the state, is now facing bigger scrutiny because South Dakota “has one of the nation’s largest coronavirus hot spots.” Or does it?

An article from The Washington Post had the headline “South Dakota’s governor resisted ordering people to stay home. Now it has one of the nation’s largest coronavirus hot spots.”

From the moment that headline was published, all of the mainstream media swallowed it up and began to regurgitate. Each time, the sensationalist headline got bigger and the facts more skewed.

Ever since Gov. Kristi Noem said: “I believe that South Dakotans can make the best decisions to keep themselves and their loved ones safe,” she has had a target on her back.

With tens of thousands dying from COVID-19 and the consensus amongst medical experts that shutting down is the solution, South Dakota’s relatively low numbers were a problem for the mainstream media.

Therefore, any outbreak in the state would have to become big news because the governor isn’t following the mainstream media’s narrative. This becomes a problem, especially as they need their truth, to be the truth.

Based on The Washington Posts headline you’d expect a huge number of people infected and dead but as of writing, that’s simply not the case.

The facts of the story

FACT: A Smithfield Foods meat processing plant has had over 300-cases of COVID-19 confirmed.

FACT: As the plant is considered essential, it would have remained open even if South Dakota was locked down.

FACT: South Dakota, at the time of writing has fewer than 1,200 cases, 300 of which are at the meat processing plant. The state is one of the lowest on the infections list.

FACT: As of April 16th, South Dakota had 36 people in hospital with COVID-19.

FACT: South Dakota are aggressively testing people, and those who are infected are told to stay at home.

The reality is South Dakota could end up with a massive outbreak, but in the era of fake news, The Washington Post has put the cart before the horse. The facts are, right now, Gov. Noem’s constitution first approach to COVID-19 has kept the state operational and the numbers are low in comparison to most of the United States.

We’re not naive, COVID-19 can rapidly spread and in two-weeks we might be saying it was the wrong decision, but at least the Governor made a decision based on what America was built on — because this nation was definitely not made on the back of fake news and fear-mongering.

CHECK OUT: The five politicians that make it obvious term limits are needed. Including Nancy Pelosi and more.