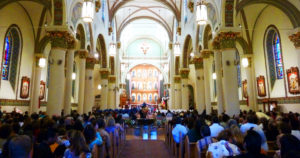 A judge has stated what we’ve believed all along, limiting a place of worship violates our religious freedom.

Kansas Gov. and Democrat Laura Kelly issued an order on April 7 that limited a congregation to ten members.

Two churches, one in Dodge City, western Kansas and another in Junction City, northeast Kansas immediately began legal procedures over the order. Gov. Kelly tried to enforce the order and block the church’s lawsuit but failed.

Instead on April 18, U.S. District Judge John Broomes overruled Gov. Laura Kelly’s order, with the condition that pastors and congregations observe social distancing. This includes standing six feet apart and avoiding the use of collection plates.

Currently, the judges decision is only legal for the two churches who sued but that could change May 2.

The Associated Press reported that “Judge Broomes signaled that he believes there’s a good chance that Kansas is violating religious freedom and free speech rights with a coronavirus-inspired 10-person limit on in-person attendance at religious services or activities and he blocked its enforcement against two churches that sued over it.”

Taking care of ourselves

Tyson Langhofer, from the conservative Alliance for Defending Freedom, who was part of the ruling said: “We can prioritize the health and safety of ourselves and our neighbors without harming churches and people of faith.” He continued: “Public safety is important, but so is following the Constitution.”

Judge John Broomes wrote in his ruling, regarding the Governor’s order: “Churches and religious activities appear to have been singled out among essential functions for stricter treatment.”

Together, their sentiment is similar to Governor Kristi Noem’s of South Dakota, who continues to put the constitution before the COVID-19 lockdown.

It’s unfortunate we didn’t have this ruling nationwide before the holy week of Easter.

May 2, a court case about religious freedoms

On May 2, Judge Broomes will be in court again with the church’s lawsuit against Gov. Kelly. The issue at hand, extending the previous ruling so that places of worship can have congregations greater than ten beyond May 2. Plus, the potential of broader injunctions. Including extending the ruling for more places of worship.

Despite failing at her first attempt to block the lawsuit, Gov. Kelly continues to defend her order, saying: “This is not about religion. This is about a public health crisis.”

She’s right. It’s not just about religion, it’s also about the constitution. The freedom to worship is integral to the American way of life. It is a relief that some, like Judge Broomes, continue to protect it when possible.

It is amazing that, despite Kansas’s Republican-controlled legislature and GOP lawmakers wanting to remove parts of the stay-at-home order, it’ll remain in effect until May 3 at least. The Attorney General Derek Schmidt, even wrote that “Gov. Kelly’s order was likely unconstitutional and he even discouraged law enforcement from following it.”

Gov. Kelly, who called the Judge’s decision “preliminary” also said: “There is still a long way to go in this case, and we will continue to be proactive and err on the side of caution where Kansans’ health and safety is at stake.”

Kelly’s office has since stated that six deaths have come from religious gatherings. A tragedy, and a number likely to be used as evidence in the hearing come May 2.