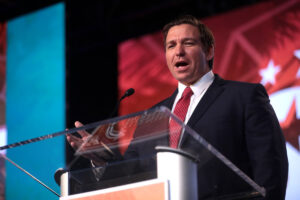 Florida’s Gov. Ron DeSantis didn’t only lead his state in tackling coronavirus effectively, he’s also taking on the mainstream media who still refuse to give credit where it is due.

Yet, again, the Governor has had to defend his coronavirus actions against a media narrative that doesn’t fit with the reality of Florida’s numbers. A narrative that continues to condemn Florida to a hypothetical scenario where the state ends up with deaths that rival New York.

What adds to the bizarre nature of the mainstream media is that New York’s Gov. Andrew Cuomo isn’t being attacked, despite being the yardstick Florida is presumptively being measured against.

Clearly, attacking Cuomo doesn’t fit the narrative they want to share with the American people.

CHECK OUT: Mayor who defied stay-at-home order to get haircut uses mob-like tactics to lockdown church.

Fortunately, Gov. Ron DeSantis isn’t hiding from the narrative and is literally landing knock-out blows with his facts.

In a calm but confident punch to the pro-Democrat-media the Governor said: “You’ve got a lot of people in your profession who waxed poetically for weeks and weeks about how Florida was going to be just like New York.”

Gov. Ron DeSantis, then with arms wide open in a “come on then” stance continued: “Wait two weeks, Florida’s going to be next. Just like Italy, wait two weeks. Well hell we’re eight weeks away from that and it hasn’t happened.”

One thing is certain, Gov. Ron DeSantis is pulling no punches in the video below.

At the time of writing New York has suffered over 22,000 deaths. Florida, one of the locations where the wealthy one-percenters from New York fled to when the pandemic started, has suffered 2,000 deaths in comparison.

Considering Florida has a higher population than New York (as of 2019), plus is one of the top destinations in the United States that people fly to both nationally and internationally, surely the Governor and state should be celebrated?

Not according to the media.

An article that talks about Florida’s early response, but ignores the state’s effective use of track and trace, how it warned medical locations to stock up on personal protective equipment (PPE), locked-down nursing and care facilities, amongst other immediate actions.

Florida reacted weeks before there was a single case in the state. Yet the article tries to paint a very negative picture. Clearly only Governors who locked-down their state and enforce unconstitutional executive orders can get praised by the mainstream media.

CHECK OUT: According to an attorney, the government can forcibly administer vaccines.