Governor Suspends License Of Restaurant That Opened On Mother’s Day 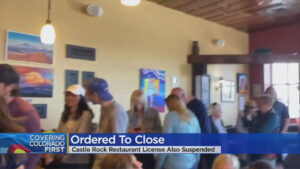 Cookies and Crème, a restaurant in Colorado that ignored the state’s restrictions, reopened on Mother’s Day for brunch. Dozens of maskless diners attended.

The restaurant co-owner, April Arellano, shared a video with Station CBS4 showing off its turn-out.

April and co-owner Jesse Arellano were clearly proud of their decision to reopen despite the state’s stay-at-home order. They tweeted: “We are standing for America, small businesses, the Constitution and against the overreach of our governor in Colorado!!”

It was inevitable a punishment was coming.

CHECK OUT: Fact checking is optional at 60 Minutes as Mike Pompeo conspiracy lie is debunked.

There was always going to be a backlash. One liberal radio host even said: “If they infect anyone who dies, they should be charged with MANSLAUGHTER! No one is above the law- not even Trump supporters!”

The liberal reaction was obvious. The political decision, less so.

On May 10, the Tri-County Health Department ordered the restaurant’s closure.

A day later, on May 11, state health officials suspended the business license fully.

During a press conference, Gov. Jared Polis said: “I hope, I pray that nobody falls sick from businesses that chose to violate the law, but if the state didn’t act and more businesses followed suit, it’s a near guarantee that people would lose their lives and it would further delay the opening of legitimate businesses.”

The business license will be suspended for 30 days but we’re surprised it’s not worse considering a business owner in Texas was sent to jail for seven days and fined $7,000.

When asked, Jesse Arellano said they reopened because of community demand, after receiving emails from customers wanting to celebrate Mother’s Day.

He said: “We’re here to serve the people of the community, churches and schools, and anyone we can help. That’s why we’re in the business, to serve people.”

After reopening on Mother’s Day both Jesse and April Arellano have received death threats including atrocious comments such as: “I hope all your family all gets COVID and dies.”

The restaurant complied with the state’s rules for two months before Mother’s Day and was in a tight spot financially according to the business owners.

Jesse added: “Everyone is tired of this and they’re ready to live life. What kind of life are we going to have if we’re all scared to live and we’re always in a bubble? No one wants to live like that. There are risks all over the place, every day. There are animals who can hurt you in the mountains, but you don’t stop going there. You can drown in the ocean surfing, but people still go.”

Reopening without social distancing, and flaunting it on Twitter was always going to end in a punishment. Yet, Mr. Arellano makes a valid point. We can’t forever live in fear.