Great news for President Trump about the 2020 election 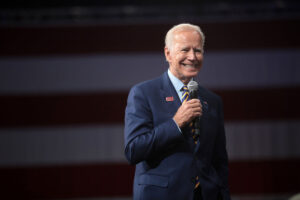 MORE GOOD NEWS: From all voters asked, the poll showed that 57-percent of those asked believe President Trump will be reelected in November. This means only 43-percent think Joe Biden will hold the office in 2021.

Spencer Kimball, Director of Emerson College Polling said: “While Trump is struggling to handle the coronavirus epidemic, it appears Biden has his own image issues with voters and may need help from former President Obama on the campaign trail to try and transfer the positive image voters have of Obama to Biden.”

Considering Biden’s “image issues” include a sexual assault allegation, it’ll take more than wheeling out a former President to fix.

CHECK OUT: Joe Biden under investigation for sexual assault as mainstream media show their double standards.

The Emerson College poll isn’t all good news. It shows that the President’s approval rating has dropped by 5 points, from 46-percent in March to 41-percent in April.

The President’s approval rating regarding his handling of the coronavirus has also dropped from 49-percent to 39-percent. Plus, his disapproval rating when handling the Federal Government has jumped 10 points, from 41-percent to 51-percent.

In the Presidential ballot test, the numerical difference between President Trump and Biden is the same as last month, where Biden led 53% to 47%. The poll also showed that 10-percent of voters remained undecided.

These numbers show that the Emerson College poll isn’t biased towards the President. However, despite these negative poll numbers, the President is only 6 points behind Joe Biden at a moment of national fear and blame.

CHECK OUT: The mainstream media get shredded by GOP Governor who didn’t put state into draconian lockdown.

For those worried that Biden will enlist Obama in his election campaign, you can rest a little easier. Not only does social distancing stop Biden and Obama teaming up, but it also stops any potential large election events.

This means this election could be down to who has the biggest war chest, and right now, President Trump is in a good place. The President, who has been accumulating his war chest since shortly after being elected in 2017 has almost $200-million more than Joe Biden.

CHECK OUT: Meat will disappear from grocery stores if lockdown isn’t lifted.