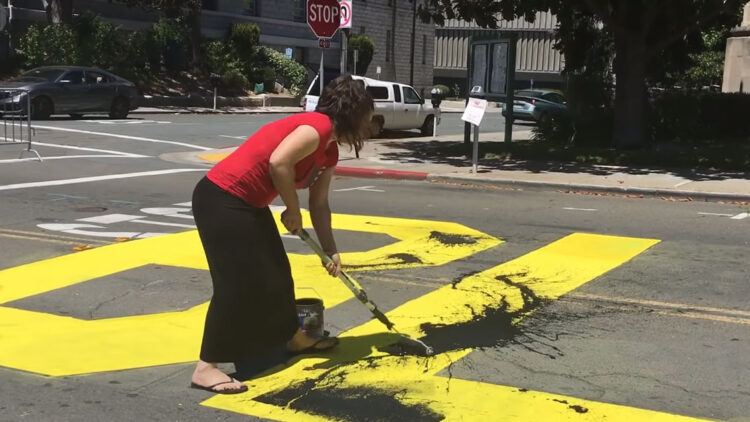 What happened: Tuesday, July 7, two Californians were charged for painting over a big yellow Black Lives Matter mural in Contra Costa County. They did this on Independence Day and there’s a video showing them in action below.

CHECK OUT: Watch a BLM “peaceful protester”, with their identity hidden in an outfit AOC would be proud of, sneaking up to a driver who had stopped because of a human roadblock and opened fire.

Since George Floyd was murdered, Governors, Mayors, and other officials have supported anarchists as they destroyed squad cars, looted property, set businesses ablaze, created roadblocks, vandalized statues, and defaced entire city’s. In many cases, these anarchists have been let off, sympathized with, and celebrated.

Yet painting over a Black Lives Matter mural is a hate crime.

Clearly, the saying ‘actions have consequences’ only applies if you’re questioning the Black Lives Matter movement.

CHECK OUT: Atlanta took down barriers. Anarchists put them back only for the Mayor to negotiate over their demands. Unfortunately, demands weren’t met soon enough because an 8-year-old child was killed at the barriers.

What’s horrifying is that, if the charges stick in court, these two Californians could face up to a year in prison.

Questioning Black Lives Matter: So far the movement has been responsible for at least two deaths in Seattle’s Capitol Hill Autonomous Zone and the killing of an 8-year-old in Atlanta, not to mention the horrifying riots, looting, and police violence which has been masked under the tag “peaceful protests” since the start.

At this point, it would be wrong for people not to question the movement. Yet, any negativity towards Black Lives Matter is called racism and a hate crime even when it is scientifically proven that fear of violent protests is keeping citizens in lockdown.

The District Attorney statement continued: “The mural completed last weekend was a peaceful and powerful way to communicate the importance of Black lives in Contra Costa County and the country. We must continue to elevate discussions and actually listen to one another in an effort to heal our community and country.”

Double Standards: Clearly the two Californians weren’t listened to, discussed with, because it seems there’s no interest in healing the community or county when it comes to their act of vandalism. That’s only applicable when it comes to the Black Lives Matter movement and those protesting or vandalizing in its name.