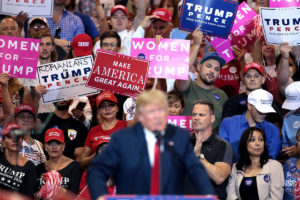 A top hospital executive in Buffalo was fired for comments made on Facebook that bashed President Trump’s handling of the COVID-19 outbreak, stating that his supporters should be those who suffer during this pandemic. A second high-ranking employee at a different medical institute was also put on leave for participating in the comments.

We have former Republican operative Michael Caputo to thank for identifying and giving this sick discussion a platform. The political strategist, who worked with politicians including Jack Kemp spotted the Facebook comments and shared them with his 37k followers. Caputo also added phone numbers for both institutes in his tweet, very smart.

Sadly we see disgusting comments made online towards President Trump and his supporters daily, the difference here is that the exchange included COVID-19 and medical professionals who are meant to be protecting communities. Clearly, this is a line that cannot be crossed, Trump haters should take note.

CHECK OUT: New Jersey man charged with making a terrorist threat after coughing with intent

Laura Krolczyk, who is now the former Vice President for External Affairs was first put on administrative leave by the Roswell Park Comprehensive Cancer Center while they carried out an investigation. The verdict was damning, leading to her dismissal. It’s ironic that her job was External Affairs, you’d think she would know better.

Bizarrely, her cohort in this exchange, Lisa TaTrovato, the Director of Development for Hauptman Woodward Medical Research Institute hasn’t suffered the same fate as Krolczyk. They both shared similar opinions, which were savage towards President Trump’s supporters. Only time will tell if she keeps her job.

Based on Caputo’s screengrabs the Facebook discussion included the following comments:

Krolczyk posted a link to an article about the ‘Trump administration’s reluctance to pay $1 billion to General Motors and Ventec for ventilator production’ with the comment “Vote Trump”.

LaTrovato responded, “But will waste more than that on a wall and space force.”

Krolczyk: “Trump supporters need to pledge to give up their ventilators for someone else … and not go to the hospital.”

LaTrovato: “I think they should be the only ones in packed churches on Sunday.”

Krolczyk: “They should barricade themselves in there and ride this out.”

Another Facebook user commented, “Wow, just wow, so you’re saying we decide who lives and dies based on political views? Great plan.”

Krolczyk finally added, “Also don’t cash your stimulus check. It’s all a hoax. Chew some ibuprofen and be on with your day.”

In terms of comments made towards President Trump supporters, at least these aren’t packed with terms like racist, bigot, or Nazi. What’s most disturbing is that these medical professionals are taking their anger out on churchgoers. Plus, by bringing up ibuprofen specifically in a hostile way, it adds weight to the rumors that the painkiller does make COVID-19 symptoms worse despite medical evidence saying otherwise.

Perhaps if Krolczyk had read why President Trump backed off from the General Motors deal none of this would have happened. After all, if you’re promised 20,000 ventilators but will only get 7,500, you should expect some negotiation on the $1 billion costs.

CHECK OUT: Mexican protesters blocking border crossing with Arizona because of COVID-19 fears