WATCH: How Joe Biden Will Deal With China (Trainwreck) 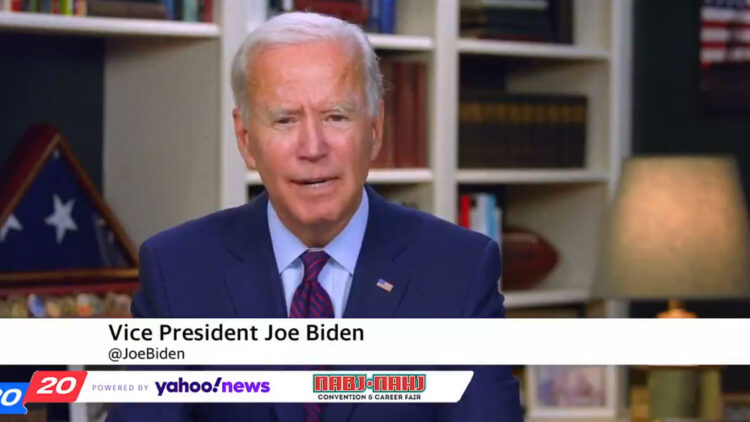 Just when you thought Joe Biden couldn’t get more incoherent, he pulls a stunning bit of jibberish out of his back pocket.

When asked about how he’ll deal with China, instead of answering the question. Biden stumbles through a sentence made up of four unique thoughts, none of which fit together.

It was so bad, one person on Twitter even said: “I like how Biden delivered his message in Chinese. Not familiar with that dialect, though.”

The rest of the comments online ranged from people feeling sorry for him, to others questioning his legitimacy as a leader.

Watch the video below and judge for yourself:

CHECK OUT: Democrats won’t condemn the groups leading violent riots and domestic terrorism. Yet, they have no issue condemning the federal forces for defending citizens.

Joe Biden wasn’t done at one, he decided to treat us to two big gaffes during the interview. One for each foot.

However, his second gaffe was at least coherent. Bizarre, but coherent.

CHECK OUT: Watch former-President Obama’s political rally for the Democrat Party (eulogy) at a funeral. Plus, check out the hypocrisy as the funeral clearly does not follow social distancing rules indoors.

Voting For Democrats, Not Joe Biden

Out of all the comments online, the one that stood out read: “Curiously, I now have friends who say they aren’t voting for Biden — they’re voting for an administration. They seem to have no issue voting for a placeholder. Scary.”

The idea that people will vote because they want President Trump out, more than they support someone is insane.

That’s the only reason at this point someone would vote Democrat, and we get it. President Trump puts his foot in his mouth often.

Yet, Joe Biden permanently keeps a pair of slippers, a pair of sneakers, and a pair of boots in his mouth. And he’s the least scary Democrat.

For example, House Speaker Nancy Pelosi has held the country to ransom over coronavirus stimulus relief bills. Destroying small business in the process.

Plus, it is Democrat Mayors and Governors who are supporting anarchy while slashing Constitutional freedoms. Democrats won’t even condemn the groups committing domestic terrorism.

Simply put, a vote for a Democrat administration is a vote for what the United States is right now. A fear-mongering anarchic social agenda-driven nation.

As we wrote earlier. That is scary.

CHECK OUT: Did you know 18 out of the 20 Most Dangerous Cities in the United States are run by Democrats. The other two are run by independents.