HYPOCRISY: Reporter Supports Riots Until It Reaches His Gated Community 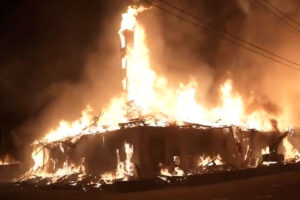 A veteran NBA reporter has had his hypocrisy over the riots called out after he supported arson in a distant state, only to change his mind and call the rioters animals once they were ransacking his community.

May 28: Reporter Chris Palmer tweeted: “Burn that **** down. Burn it all down,” in response to a picture someone posted online of an affordable housing development set ablaze during the riots in Minneapolis. It was a six-story building with 189 units that could have changed the lives of under-employed, homeless, and others needing help.

Clearly, Palmer was supporting the hideous actions of rioters who were causing carnage allegedly in the name of George Floyd.

May 31: The riots had spread nationwide and even reached Los Angeles, where Chris Palmer lives. The riots got so close to Palmer’s residence that he tweeted: “They just attacked our sister community down the street. It’s a gated community and they tried to climb the gates. They had to beat them back. They destroyed a Starbucks and are now in front of my building. Get these animals TF out of my neighbourhood. Go back to where you live.”

Surely calling people out as animals and telling them to go back to where they live is borderline racist? The hypocrisy is off the charts and Palmer doesn’t even try to hide it (see below).

CHECK OUT: Watch looters rob looters as the chaos continues across the country.

Burn It All Down

The veteran NBA reporter Chris Palmer seemed to change his mind over supporting the protest. For some reason, burning down affordable buildings in a different state is okay, but attacking a Starbucks and the gates of secure communities is crossing a line.

Palmer’s reaction to being called out is priceless and shows how hypocritical people are when throwing stones from ivory towers.

CHECK OUT: AOC tells rioters how to keep their identity secret and hands protected in bizarre protest tip sheet.