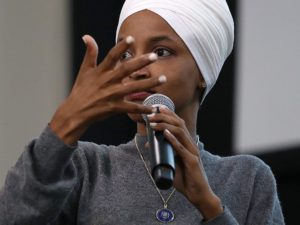 Freshman Rep. Ilhan Omar (D-MN) on Tuesday denied allegations made by a Washington, D.C., mother that her Democrat consultant husband engaged in an extramarital affair with the far-left “Squad” member in recent months.

According to divorce filings obtained by the New York Post, Dr. Beth Jordan Mynett alleges her spouse, Tim Mynett, confessed to having an affair with Omar in April. Further, Dr. Mynett alleges her cheating husband made a “shocking declaration of love” for the Minnesota Democrat and dumped her soon after, show filings submitted to the Superior Court of the District of Columbia on Tuesday. The development follows after a Daily Mail report stating Omar no longer lives with her husband, Ahmed Hirsi, who once worked as a senior policy aide for her.

In a sit-down interview with WCCO, Omar denied Dr. Mynett’s explosive claims and refused to address any aspect of her personal life.

“Are you separated from your husband? Are you dating somebody?” WCCO reporter Esme Murphy asked Omar.

“No, I am not,” the lawmaker tersely replied, before adding, “As I said yesterday, I have no interest in allowing the conversation about my personal life to continue and so I have no desire to discuss it.”

Although Omar refuses to speak on accusations of an affair with Mynett, questions have arisen regarding their close business dealings. Since 2018, the lawmaker has paid nearly $230,000 in campaign funds in consulting fees and travel expenses to Mynett’s E Street Group.

During the interview with WCCO, Omar refused to address whether she married another man, Ahmed Nur Said Elmi, for U.S. immigration purposes. Elmi has faced allegations that he is Omar’s brother, a claim that Omar has repeatedly denied.

Omar has faced scrutiny stemming from a joint tax return she filed with Hirsi in 2014 and 2015 — before they were actually remarried and while Omar was legally wed to Elmi.

Omar has claimed that she married Hirsi, who then went by Ahmed Aden, in an Islamic ceremony in 2002, though never married legally. The pair split up 2008 and she married Elmi, legally, in 2009. Although the lawmaker broke up with Elmi in 2011, she remained married to him while she filed tax returns with Hirsi. Records show she divorced Elmi before marrying Hirsi.