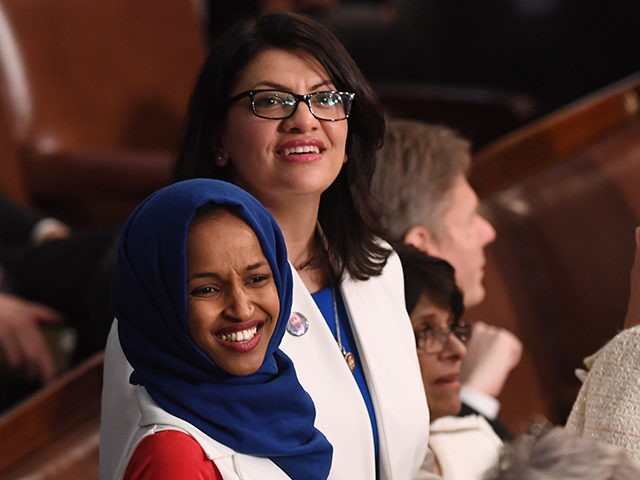 Reps. Ilhan Omar (D-MN) and Rashida Tlaib (D-MI) are the first members of Congress to sign on to a pledge launched by a progressive advocacy organization to impeach President Donald Trump.

ABC News producer Ben Siegel on Tuesday morning reported that the freshman congresswomen were first to back the pledge, which was organized by “By the People,” which bills itself a grassroots group that “came together because we saw that millions of Americans want the Trump Administration removed from office.”

“We are committed to ending this administration and creating a country that lives up to its founding ideals,” the group’s About Us section reads.

Tlaib made national headlines for remarks she made at a reception organized by progressive advocacy group MoveOn.org hours after being sworn in as a member of Congress, in which she vowed to remove President Trump from office, stating: “[W]e’re going to go in there and we’re going to impeach the motherfucker.”

Addressing the Michigan Veterans Foundation days after the incident, Tlaib refused to apologize for her profanity-laden pledge to impeach, instead expressing regret that the remark became a political “distraction.”

“I understand I am a member of Congress. And I don’t want anything that I do or say to distract us. That is the only thing I apologize for, is that it was a distraction,” she said. “We have a course that we have to stick to, and nothing I say should distract us from that. The shutdown has to be at the forefront, that’s what I am here for, to shift to. This is so much more important.”

Asked if she will demand the president face impeachment upon taking office, Omar replied: “If [special counsel Robert Mueller’s] report comes out and we keep having the breaking headlines every single day, I’m pretty sure that [impeachment] is going to call for itself.”

“I hit up Rashida. I sent her a text, and I was like, ‘Don’t worry about it. Who cares?’” Ocasio-Cortez told the comedians.

“The double standard in that is [Trump] never gets in trouble for all the booboo words he uses,” Omar chimed in.

Appearing on NBC News’ Today last month Pelosi echoed past statements on impeachment talk, telling host Savannah Guthrie that the Mueller report must first be released before any action is taken to remove the president.

Omar and Tlaib have faced accusations of anti-Semitism since taking office, a charge the two deny despite their repeated offenses. Earlier February, Omar, a member of the House Foreign Affairs Committee, set off a firestorm of criticism for suggesting Republican lawmakers are bribed by the pro-Israel advocacy group American Israel Public Affairs Committee (AIPAC) in exchange for supporting the Jewish state.

In 2012, the Minnesota Democrat tweeted: “Israel has hypnotized the world, may Allah awaken the people and help them see the evil doings of Israel.”

Tlaib came under fire in January for suggesting senators backing an anti-boycott, divestment, and sanctions (BDS) bill hold dual loyalties., tweeting: “They forgot what country they represent.” Days later, a photo emerged of Tlaib posing with Abbas Hamideh, a Hezbollah-backing activist, during her swearing-in reception in Detroit.

Both their remarks and ties to anti-Israel groups have left some Jewish leaders on edge.

“We are very concerned about some of the currents in the body politic, especially on the democratic left,” Malcolm Hoenlein, the CEO of the Conference of Presidents of Major American Jewish Organizations, told the Times of Israel.