‘I’ll Represent the Oppressed People’: Gwen Berry Promises to Protest on Medal Stand if She Wins 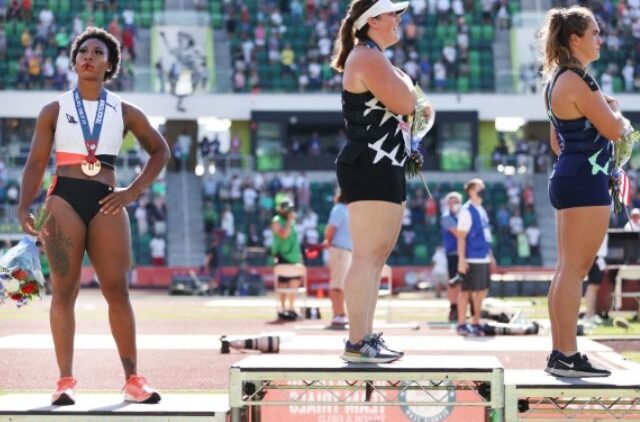 U.S. Olympics hammer thrower Gwen Berry now says that she will protest against the United States on the medal stand to “represent the oppressed peoples” if she medals this week.

Berry raised eyebrows by refusing to stand at attention for the national anthem during the U.S. Olympic Trials in June when she won the bronze in the hammer throw. But until this weekend, Berry would not say if she intended to mount any protests if she medals at the Games in Tokyo. On Sunday, Berry put to rest any questions about her intentions.

During an interview after she made it through the qualifying round in Tokyo, Berry insisted that she has “earned the right” to protest.

“I feel like I’ve earned the right to wear this uniform,” Berry said, adding, “I’ll represent the oppressed people. That’s been my message for the last three years.”

“I’m just focused on what I need to do,” Berry concluded. “Because all those people who hate me, they aren’t here. So, they can’t affect me.”

Berry debuted her attack on America on the medal stand during the Pan American Games two years ago when she won the gold. Berry was also handed a 12-month probation for violating rules against protesting on the medal stand.

When she protested during this year’s Olympics trials, Berry insisted that she was “set up” when the national anthem played as she stepped up to the medal stand. Somehow, Berry seemed to think that the anthem was played to get at her during the ceremony.