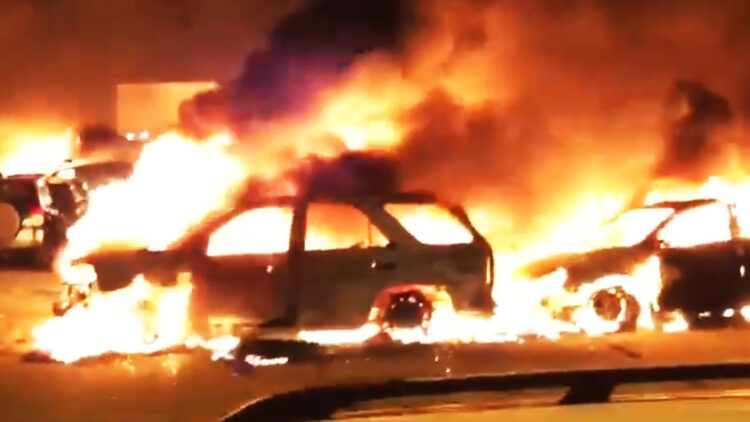 Another police shooting, another burnt state. The Jacob Blake riots, which began Sunday have escalated to the point where parts of Wisconsin looked like the embodiment of Hell.

CHECK OUT: Watch the video of the Jacob Blake shooting and make up your own mind about whether the police were right or wrong.

WHAT HAPPENED: The biggest fire was set at a used car dealership.

What does setting someone’s business ablaze have to do with racial justice or police brutality?

That car dealership was someone’s business, and no doubt several people’s livelihoods.

MORE FIRES: Not content with a car dealership, a garbage truck was moved to block a road before being set ablaze.

And obviously those great oppressors, small businesses were set on fire too.

All of this because Jacob Blake was shot? No.

Instead, it’s as if the country has mail-in terrorists that go wherever anarchy can be hidden under the mask of racist justice.

REPARATIONS: According to Black Lives Matter when they loot it’s so that someone can eat, have clothes, and money that day.

Well, based on the videos, it looks like a lot of criminals in Wisconsin will have those things. Unlike the business owners.

Unsurprisingly there’s a huge pile of bricks available for these criminals to use as weapons. These appear at almost every riot, proving they’re organized and financed.

What’s horrifying is that we’re at a point in America where the terrorists can walk around with assault weapons. They’ve upgraded from rocks.

Even A Museum Was Attacked

That’s right, even a dinosaur museum was attacked during the Jacob Blake riots. The big question is why? Was the dinosaur statue a slave-owner, a Confederate general? Or was it just a case of the anarchists wanting to destroy something…

CHECK OUT: The left hypocrisy. A news reporter supports the riots until they reach his gated community, and then he calls them animals.

DOMESTIC TERRORISTS: From arson to looting, these Jacob Blake riots, like all the other riots, create fear, destroy lives, and do it with support from Democrats and corporate America.

How is that possible?

IGNORANT OF THE TRUTH: We can watch pro-sports, where everyone is pro-Black Lives Matter. At the same time, we can look online to see Black Lives Matter terrorists attacking police, looting stores, setting fires, and worse.

There is only one truth, but everyone on the left appears to be pandering in support of domestic terrorism. They ignore the facts, which are Black Lives Matter supports looting, supports dismantling the police, and supports anarchy.

Sadly, the mainstream media, social media, and TV appear very much on the side of the left. So it is up to the people to wake up and see these facts.

CHECK OUT: Proof of high-level corruption as domestic terrorists get released behind an Attorney General’s back.