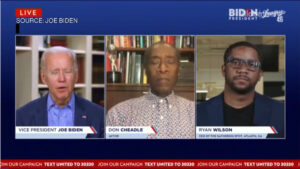 Joe Biden says between 33-million and 49-million Americans aren’t very good people. Ironically, in the same video, he says the President is dividing the nation.

The presumed Democrat nominee made the statement while taking part in an online forum with black supporters. He said that he believed 10 to 15-percent of Americans are not very good people.

The national population is roughly 328-million.

It’s reminiscent of how Hillary Clinton called Donald Trump supporters a “basket of deplorables,” who are “racist, sexist, homophobic, xenophobic, Islamophobic — you name it.” A statement that the left side of America, which includes the mainstream media found very fun to repeat.

Will they find Joe Biden’s latest gaffe as repeatable?

In the video, you’ll see that it is a Biden for President production, and includes Hollywood A-Lister actor Don Cheadle as its moderator.

The online meeting was focused on racial relations post George Floyd and what’s ironic is that, while protesters, politicians, and the mainstream media are calling out President Trump, saying that he is allegedly dividing America, Biden, calls a portion of America bad people.

One person on Twitter wrote: “The idea there are to 50 million “not very good people” (bad) people in this country is preposterous. I believe a leader should say, “listen man, 99% percent of all Americans want to live peacefully and productively with one another. We need to focus on making that goal…”

If President Trump can be blamed for dividing the nation, then questions have to be asked about Joe Biden’s statement because it is not one of unity.