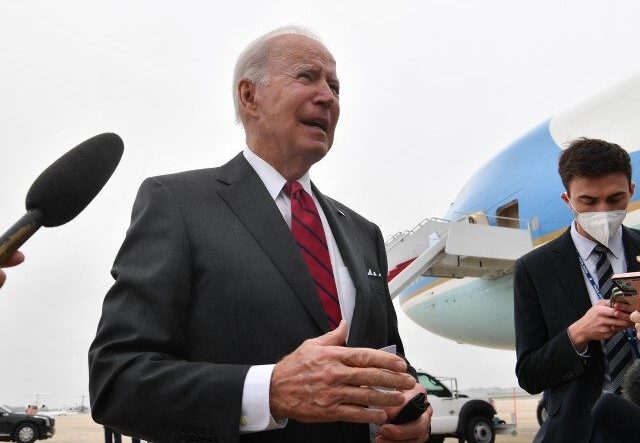 President Joe Biden further reacted to a leaked draft opinion from the Supreme Court on Tuesday, criticizing the “radical” argument against a constitutional right to abortion.

“The idea that we’re gonna make a judgment that is going to say that no one can make the judgment to choose to abort a child based on a decision by the Supreme Court I think goes way overboard,” Biden said.

The president spoke to reporters about the draft opinion as he left Washington, DC, for a trip to Alabama to visit a Lockheed Martin manufacturing facility.

During his remarks, Biden falsely claimed that all mainstream religions believe the beginning of human life is open to interpretation.

“Look, think what Roe says. Roe says what all basic mainstream religions have historically concluded — that the right — that the existence of a human life and being is a question. Is it at the moment of conception? Is it six months? Is it six weeks?”

The president failed to mention that the Catholic Church, of which he claims to be a member, teaches that life begins at the moment of conception.

Biden commented on the issue of abortion after a draft opinion from Justice Samuel Alito to overturn Roe v. Wade was leaked to the media.

He appeared deeply concerned by the leaked opinion, arguing the Supreme Court was threatening to make a “radical decision” if they did choose to overturn Roe v. Wade.

“If this decision holds, it’s really quite a radical decision… it basically says all the decisions related to your private life — who you marry, whether or not you decide to conceive a child or not… what does this do?” he asked.

He also warned that the constitutional right to gay marriage would be endangered as well as other Supreme Court cases involving the right to privacy.

“It’s a fundamental shift in American jurisprudence,” he said.

Biden said he supported a congressional effort to codify Roe v. Wade into law but declined to say whether or not he supported breaking the Senate filibuster rules to ensure its passage.

“I’m not prepared to make those decisions now,” he said.