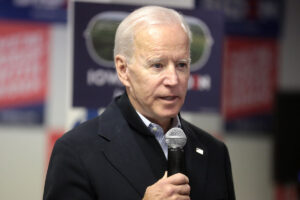 Joe Biden has vowed to address “institutional racism” during his first 100 days in office, that’s if he wins the 2020 election. He’s made the vow to community leaders in Delaware and to big-city mayors battling riots.

Joe Biden told leaders in Delaware: “Hate just hides. It doesn’t go away, and when you have somebody in power who breathes oxygen into the hate under the rocks, it comes out from under the rocks.”

He then said to mayors: “I really do believe that the blinders have been taken off. I think this tidal wave is moving. I realize we’ve got to do something big, we can do it, and everyone will benefit from it.”

The mayors were from Atlanta, Chicago, Los Angeles and St. Paul, Minnesota.

Clearly, Joe Biden and the media have forgotten that he was one of the people who wrote and helped pass The Violent Crime Control and Law Enforcement Act. A bill that sent countless black people to prison for mundane actions between 1994 and 2017. A bill that has historically been part of the racism problem. A bill that President Trump has been trying to dismantle since he took office in 2017.

The question has to be asked, in 38-years, including decades in Congress and eight years as Vice President under the first African-American President, didn’t Biden already have his chance to fix things?

CHECK OUT: Joe Biden lies in church, re-writing his history over the coronavirus while telling community leaders that police should shoot unarmed people rather than use non-lethal methods.

The big question is, how will Joe Biden fix “institutionalized racism” in 100 days? The answer, he’ll set up a police oversight body and give access to capital for minority Americans. Two things that have been done before and if they worked, we wouldn’t be here in this mess now.

During President Obama’s administration, people suffered through Ferguson and Baltimore. Proving Joe Biden has seen this before, and didn’t react with any magical solution. So why are people believing him now?

To community leaders, Joe Biden said: “I want to make something clear. I don’t expect anything from the black community.” Ironically, he said exactly what those community leaders wanted to hear. Obviously he wants their vote so he’s offering what they want. It’s basic politics.

Biden then told mayors that they’d get capital, which after President Trump denied them federal support to address the coronavirus fallout, is exactly what they wanted to hear.

Atlanta Mayor Keisha Lance Bottoms said: “To see the president of the United States say that he’s going to send the military into our communities but hadn’t mentioned sending a single dime of support into our communities, speaks to where we are in America.”

Community leaders and mayors take note, Joe Biden is a man who revised his history in church about the coronavirus, has recently dodged a sexual assault allegation, is the second-most reviled person amongst Secret Service agents, and just one week ago, told a black radio host he was not black because he didn’t know who to vote for.

CHECK OUT: Hypocrisy proved, reporter supports rioters burning down affordable housing but then calls them “animals” when they reach his home.