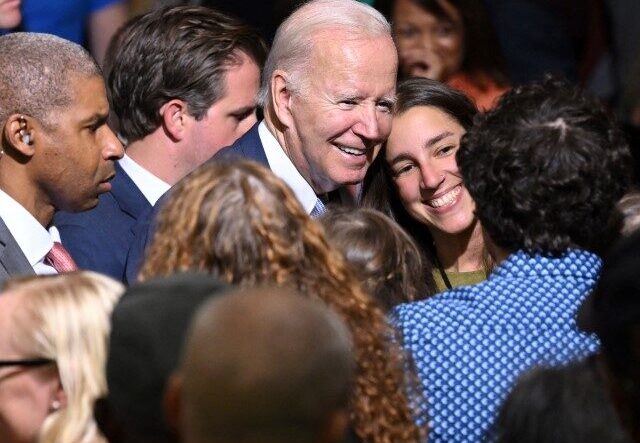 President Joe Biden appeared to get a little too personal while posing for pictures with a young girl and her friends on Friday.

“Now, a very important thing I told my daughters and granddaughters: ‘No serious guys until you’re 30,’” the president said while grabbing the girl’s shoulders.

“Okay,” the unidentified girl said while laughing nervously, “I’ll keep that in mind.” Another woman in the background could be heard agreeing with Biden, repeatedly saying, “At least.”

Kaden D’Almeida — who filmed the moment — appeared to be waved off by a secret service agent from filming further after the president gave his awkward relationship advice to the young girl.

The encounter occurred at Irvine Community College in Irvine, California, where the president gave remarks on lowering inflation and pharmaceutical drug costs.

The president has offered the same dating advice to younger individuals before.

While visiting a group of elementary school students in Philadelphia, after a young girl told the president she was nine, Biden responded, “The only thing I want you to remember — no serious guys till you’re 30 years old,” Breitbart News reported.

While visiting a Haitian cultural center in Miami in October of 2020 during the presidential campaign, Biden told a group of young girls who had just performed a traditional dance that he wanted to “see them dancing when they’re four years older.”

In the middle of a speech honoring military personnel last year, the president told one veteran that his young daughter looked like she was “19-years-old, sitting there with her — like a little lady with her legs crossed.”

As vice president, Biden was also seen on camera appearing to sniff the hair of young children during the swearing-in ceremonies of congressional members.