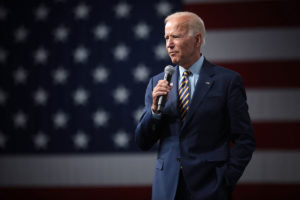 Joe Biden, the man going against President Trump in November’s election is under investigation by Washington DC’s police after a sexual assault claim.

Tara Reade, who claims the sexual assault happened in 1993, filed the criminal complaint with the Washington, DC police on April 9.

The former Biden staffer described what allegedly happened on March 25 in an interview with Katie Halper. We’re not going to repeat it, but if you want the details her interview is linked on Twitter:

Reade, who says she only came forward because of harassment said: “(I) Wanted to make it clear that I would be willing to go under oath or cooperate with any law enforcement regarding it because it did happen. Even if it was 26 years ago.”

A spokesperson for Joe Biden said: “Women have a right to tell their story, and reporters have an obligation to rigorously vet those claims. We encourage them to do so because these accusations are false.”

On April 22, Christine Metzger of the Metropolitan Police Department said: “This is an active, ongoing investigation that is part of our regular review process.”

Since the interview, Reade has acknowledged that the statute of limitations has run out on her claim.

This article isn’t about Joe Biden, but the mainstream media’s hypocrisy.

CHECK OUT: The book “Pelosi is not going to like,” sets the record straight on the immigration debate.

In this era of #MeToo adding the word “claim” or “accuser” to a sexual assault headline has become a cop-out for the media.

Until proven guilty, reports should not be allowed because an accusation can be made by anyone regardless of evidence and with the media, it can never be taken back.

However, the norm in the media is to presume guilty until proven innocent, but this methodology isn’t in effect for Joe Biden. The mainstream media are giving the Democrats best a pass.

When Tara Reade accused her former employer Joe Biden, who was a Senator at the time, the media was silent, and then, when it finally made headlines, they forgot their usual guilty until proven innocent norm.

You would think the mainstream media would take Reade’s side, after all, she said to Vox: “I don’t want Trump to be president.”

The reality is, Tara Reade has no evidence. It is one person’s word against the other but the precedent has been set over and over by the mainstream media. And now they’ve reversed their methodology just for Joe Biden, it puts their hypocrisy on a pedestal even more so than usual.

In regards to Judge Brett Kavanaugh, the mainstream media wrote hundreds of articles attacking every aspect of his life and it was all based on the word of Christine Blasey Ford.

She accused Kavanaugh of a rape that allegedly happened decades prior when she was back in high school. She had no evidence, just like Tara Reade.

The big difference is that Tara Reade can prove she was in contact with Joe Biden. Christine Blasey Ford couldn’t even prove that and yet the mainstream media attacked Kavanaugh with headlines including:

The Federalist writer Mollie Hemingway said: “CNN’s political campaign against Kavanaugh included sympathetic articles toward Blasey Ford, hostile articles about Kavanaugh, supportive pieces about the importance of believing women even when they provide no evidence, hostile pieces about the danger of due process and empathy for men, and targeting of key Republican senators. CNN’s work culminated with their award-winning efforts to sway Arizona Sen. Jeff Flake, broadcasting a confrontation between a professional activist and the wavering senator.”

Compare that against the headlines against Joe Biden…

We’re not ignoring the allegations sexual assault is evil. Yet, we don’t know the truth of either case as no one has been proven guilty. All we do know is that the mainstream media is showing an ugly double-standard that even the biggest Democrat supporters must be able to see. If not, how can this country come together?

CHECK OUT: China’s communist party outraged as others join the President in demanding an international investigation into COVID-19.