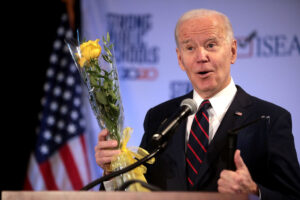 Joe Biden told a Wilmington, Delaware church full of community leaders that if President Trump listened to him, tens-of-thousands of people would still be alive today.

Two issues: #1. What he said is a lie, and #2. Where are Twitter’s fact-checking drones that flagged the President’s tweets?

BIDEN’S LIE: During the visit, Joe Biden said if the President would have shut down a month earlier there would have been 45-60 thousand people less dead. He then lies and says: “If he listened to guys like me (Biden), who back in January said we had a problem the pandemic wouldn’t have gone anywhere.”

THE TRUTH: The only person talking about the pandemic in January was President Trump and after he spoke about it in his State of the Union speech, Nancy Pelosi ripped it up and was celebrated for it.

Joe Biden still held rallies on March 2, 3, 7, 9, and 10. President Trump issued his 15 Days To Slow The Spread guidelines March 16 but tried to stop international flights from China on January 31.

Here’s what Joe Biden said about the President’s flight ban on January 31, in Iowa: “The American people need to have a President who they can trust what he talks about it. That he is going to act rationally about it. In moments like this, this is where the credibility of a President is most needed as he explains what it is we should and should not do. This is no time for Donald Trump’s record of hysteria, xenophobia, and fear-mongering.”

Joe Biden was still playing politics with lives right up to March 12, where he said: “Banning all travel from Europe or any other part of the world may slow it but as we’ve seen, it will not stop it. Travel restrictions based on favoritism and politics rather than risk will be counterproductive.”

THE FACTS: Biden says a President’s credibility is important and then lies to community leaders in a church.

If he had concerns about the pandemic in January, why was he still having rallies with groups of people in March? He could have acted Presidential and had his rallies follow social distancing rules and issued masks. These were things already being done in Europe, so it would have shown his concern.

There is no evidence that Joe Biden told the President to act in January, February, or up to March when the lockdown was put in place.

CHECK OUT: Proof the American riots are premeditated and well financed.

Joe Biden didn’t only lie in church, he told community leaders that the police shouldn’t aim for the heart, but legs.

He said: “The idea is that instead of standing there and teaching a cop, when an unarmed person is coming at them with a knife or something, to shoot them in the leg instead of the heart is a very different thing.”

GUN LAW: There are a few issues with this: #1. Police officers don’t shoot unless lethal force is justified, and #2. A shoot to wound approach completely ignores the fact officers have tazers and other methods available before drawing a firearm.

Worst still, aiming for limbs is dangerous for the officer and target. There is a reason officers are trained to aim for center mass, it is a bigger target and when under pressure, aiming for a bigger target is a necessity. Additionally, a gun shot wound to the leg can be fatal if it hits the femoral artery, plus it doesn’t stop a hostile target from firing back and causing innocent people to get hurt or killed.

This isn’t the first time Joe Biden has made a bizarre statement about firearms. In 2013 he said: “If you want to protect yourself, get a double-barrel shotgun,” and fire warning shots from the balcony. Ironically, this action could land the person he was advising in jail.

He also said: “Well, you know, my shotgun will do better for you than your AR-15, because you want to keep someone away from your house, just fire the shotgun through the door.” Biden really does like his shotgun.

CHECK OUT: AOC tells looters how to hide their identity in tip list that looks a lot like supporting violence.