Joe Biden Meeting with Coronavirus Team as U.S. Cases Explode to over One Million Per Day 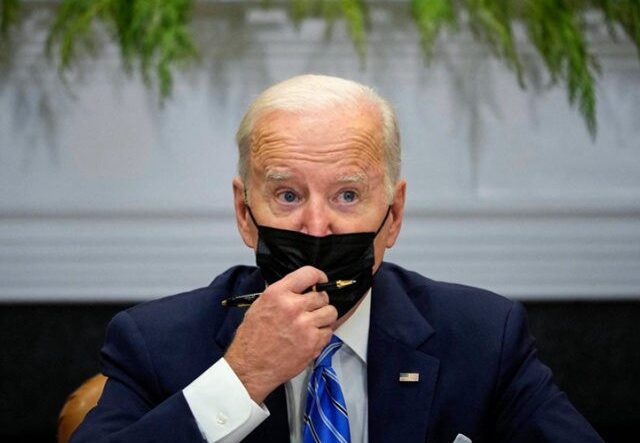 A record 1,017,376 people in the United States were diagnosed with the virus on Monday, according to case trackers.

The vast majority of the daily cases per capita reported on Monday come from New York followed by the northeastern region of the country followed by the south and the midwest.

In Washington, DC, reports of new infections are up about 800 percent over the last two weeks, according to the New York Times. In New York City, new cases have increased 600 percent.

The president continues struggling to address his failure to “shut down the virus” as he vowed to do in 2020.

The president and Vice President Kamala Harris will meet with the administration’s coronavirus team led by Dr. Anthony Fauci on Monday afternoon.

Biden faces increasing questions about his failure to deliver monoclonal antibody treatments to states, as the case of the virus surge to record highs.

Florida Gov. Ron DeSantis criticized the Biden administration for controlling the supply of monoclonal antibody treatments and pausing or slowing distribution to states.

“We’re in a situation where we’ve now asked for 40,000 more every week. Because I have people that I could help, and they are holding onto it and they’re not distributing it in the way we need it to be distributed,” DeSantis said on Fox News Monday, criticizing “Biden and his cronies” in the federal government.

The president also faces criticism for failing to ramp up coronavirus testing quickly enough, as shortages have led to long lines at testing centers around the country.

Biden has remained silent about the virus since a video conference call with U.S. governors on December 27, where he admitted there was “no federal solution” to solve the coronavirus.

The president also faces criticism for failing to order enough coronavirus antiviral treatment pills from Merk and Pfizer, recently approved for emergency use.

Despite the approval, only 250,000 treatment courses of the antiviral will be available in January.

“There won’t be enough to get to all the hospitals,” Biden admitted in an interview with David Muir on December 22, when asked how quickly the pill could be distributed.