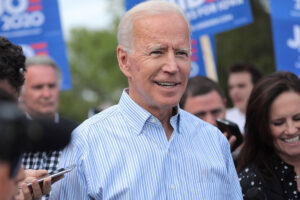 Ladies and gentlemen, we give you the Democrat’s best, Joe Biden. A man who has emerged from his basement bunker to deny sexual assault allegations and tell America millions have died.

We’ve checked the facts and can say for certain millions have not died.

Worldwide, at the time of writing, there have been under 310,000 deaths. It’s still a horrifying amount but nowhere near Biden’s millions, or the original medical prediction model, which said 2-million deaths in the United States if there wasn’t social distancing and a lockdown.

Democrats will undoubtedly say “so what? It’s a simple mistake by Biden,” and they’re right. Yet every word and tweet by President Trump is scrutinized by the mainstream media.

If the President made this mistake it would be headline news and debated on CNN as if proof he was an unfit leader.

So why should Biden get a pass? He’s already got a pass on the Tara Reade sexual assault allegations.

CHECK OUT: Police tackle a mother as if she was armed and dangerous in an altercation that began because she wasn’t wearing a mask properly. Ironic, because there’s plenty of pictures of officers ignoring the mask rule too.

THE IRISH MOTHER: March 2010, Joe Biden said: “God rest her soul” in reference to the mother of the then Irish Prime Minister Brian Cowen. Which was a surprise for the Prime Minister as his mother was still very much alive.

UNCERTAIN JOE: February 2009, Biden said: “If we do everything right, if we do it with absolute certainty, there’s still a 30% chance we’re going to get it wrong,” when talking about the repercussions for supporting the $900 billion economic-stimulus package.

According to Biden, Hillary Clinton is more qualified than he is, and she lost to President Trump. Very interesting.

The video is below.

POLITICALLY INCORRECT JOE: June 2006, while filming C-SPAN’s Road to the White House series, Biden said: “In Delaware, the largest growth of population is Indian Americans, moving from India. You cannot go to a 7-11 or a Dunkin’ Donuts unless you have a slight Indian accent. I’m not joking.”

One thing is certain, the 2020 election campaign will be interesting (and full of Biden gaffes).