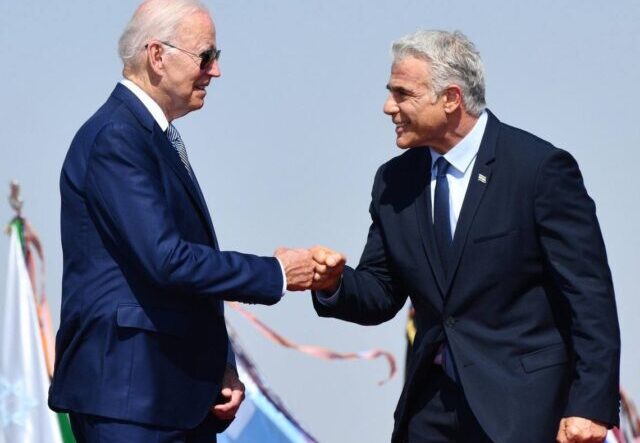 Israel Prime Minister Yair Lapid’s request to hold an emergency telephone conversation with U.S. President Joe Biden to discuss the nascent nuclear deal with Iran has been rebuffed with the excuse that the American president “is on vacation,” Israeli media reported on Wednesday.

According to Israel’s Channel 13, Lapid sought to speak with Biden in an attempt to prevent a return to the 2015 JCPOA nuclear pact but U.S. officials denied the request, informing Lapid Biden “is on vacation.”38/html/container.html

The two will eventually hold the call, the report said.

In another instance of American rejection, Israeli Defense Minister Benny Gantz was set to meet with U.S. Defense Secretary Lloyd Austin on Thursday but was informed that the latter was “out of Washington,” the report said.

Channel 13 cited an unnamed Israeli official as saying that “the gaps between [Israel] and the Americans are very large” in the newly drafted deal.

Senior Israeli officials have lamented the new deal is “even worse’ than the one that preceded it, which former president Donald Trump withdrew from in 2018.

On Wednesday, Lapid delivered a rare condemnation of Biden, saying that the latest proposal between Tehran and Western powers crossed even his own “red lines.”

“In our eyes, it does not meet the standards set by President Biden himself: preventing Iran from becoming a nuclear state,” Lapid said.

“We have made it clear to everyone: if a deal is signed, it does not obligate Israel. We will act to prevent Iran from becoming a nuclear state,” Lapid said.

A day later, however, Lapid said the pressure tactics against the American administration were working.

“The Americans accepted a large part of the things that we wanted them to include in the drafts,” Lapid said on Thursday. “It is a welcome change, and the dialogue with them is good and we will continue it.”

Biden has already faced criticism for using his vacation time as an excuse to ignore issues at home, this week coming under fire for ignoring the border crisis.