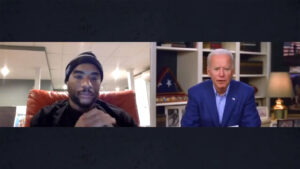 Live on air, during The Breakfast Club, former Vice President Joe Biden, the man who Democrats, the left, and the mainstream media are counting on to beat President Trump in the 2020 Election questioned a black American man’s ethnicity because he hadn’t decided who he was voting for yet.

That’s right. Joe Biden, who dodged the #MeToo movement because everyone who was up in arms screaming “believe women” decided to be hypocrites for a Democrat, should now face the wrath of everyone who has called President Trump a racist. Not to mention every civil rights organization going because what Biden said is more than questionable.

Biden said: “If you have a problem figuring out whether you’re for me or Trump, then you ain’t black.”

If that was said in a place of employment the person would be fired.

The big question is, will the media cover it, and will people react honestly, or will it, like everything else be brushed away for Joe Biden and the Democrats?

CHECK OUT: Biden slams President Trump for turning back on the world… And putting America first.

Joe Biden has been putting his foot in his mouth for years, but the accusation from Tara Reade was more serious and yet it still wasn’t covered by the media until pressured. What’s worst is that when it was covered, the media and Democrats literally just came out and said they believed Biden. This despite the same people being outraged in 2018, when Brett Kavanaugh was accused with less evidence.

The difference, Kavanaugh was a Republican.

What’s bizarre is that nothing is said of the fact Reade’s accusation was the eighth overall against Joe Biden. Granted, the other seven aren’t anywhere near as serious as Reade’s but things are rarely said about Biden’s inappropriateness in the mainstream media.

In a book wrote back in 2015, former Vice President Joe Biden was named as the second most reviled, amongst Secret Service agents.

The book titled ‘The First Family Detail: Secret Service Agents Reveal the Hidden Lives of the Presidents‘ said that Biden was a close second behind former First Lady Hillary Clinton and that he would swim naked in front of female Secret Service agents.

The author Ronald Kessler said: “Biden likes to swim nude both at his Vice President’s residence in Washington and also at his home in Wilmington which he goes back to several times a week … and this offends female Secret Service agents.”

What’s just as bizarre as how Joe Biden is treated by the media is the fact that he isn’t the official DNC nominee.

In an interview with Fox News, when asked about the DNC conference, Xochitl Hinojosa, the DNC Communications Director said: “First of all, our convention has to happen because we are not officially nominating Joe Biden in order to take Donald Trump. So our convention is happening. There is business that has to happen.”

It makes sense why Joe Biden isn’t the official nominee yet.