Joe Biden: The Second Most Reviled Amongst Secret Service Agents 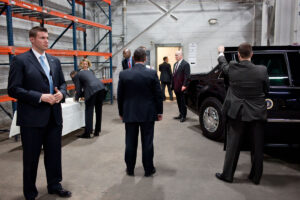 In a book wrote back in 2015, former Vice President Joe Biden was named as the second most reviled, amongst Secret Service agents.

The book titled ‘The First Family Detail: Secret Service Agents Reveal the Hidden Lives of the Presidents‘ said that Biden was a close second behind former First Lady Hillary Clinton.

The author, award-winning investigative reporter Ronald Kessler said that Biden was disliked because he used to strip down naked in front of female Secret Service agents before going for a swim, amongst other reasons.

In an interview with Fox News, Kessler said: “Biden likes to swim nude both at his Vice President’s residence in Washington and also at his home in Wilmington which he goes back to several times a week … and this offends female Secret Service agents.”

Journalist John Nolte wrote in a Breitbart article: “It’s not okay that Harvey Weinstein did it. It’s not okay that Charlie Rose did it. But when we learned in 2014 that then-Vice President Joe Biden exposed his naked body to women in the Secret Service, the media didn’t care. And the media still don’t care because Orange Man Bad.”

It’s an issue easily solved, appoint male-only Secret Service agents to protect Biden but that is not the point. It is more behavior that highlights why Joe Biden is also known as ‘Creepy Joe’.

The Tara Reade accusation is well known at this point, but it’s actually the eighth accusation against Joe Biden.

Amy Lappos, 43, who was a congressional aide when the incident occurred said that Joe Biden put his hand around her neck and pulled her towards him to rub noses. She said, she thought he was going to kiss her on the mouth.

Lucy Flores, 39, who is a former Nevada state assemblywoman said that Joe Biden had touched her inappropriately and kissed her on the back of her head at a campaign rally in 2014.

Biden even touched a women inappropriately at an event condemning sexual assault in 2019. Caitlyn Caruso told the New York Times that Biden put his hand on her thigh.

So not only is Biden inappropriate in front of female Secret Service agents, he has been inappropriate numerous times and accused by many people, including Democrats (Lappos and Flores).

CHECK OUT: Joe Biden says pandemic has cost millions of lives and thousands of jobs.

A Joe Biden spokesperson, Bill Russo, released a statement regarding the videos and images of Biden’s inappropriate behavior saying: “These smears and forgeries have existed in the dark recesses of the internet for a while.”

Take a look at some of these videos and make up your own mind if they’re fake.

There are many more videos and pictures and not all can be fake.

Only Joe Biden and Tara Reade know the truth about the sexual assault allegation, we do not. What we do know is that, from everything wrote and shown, the former Vice President acts in a way that’s totally inappropriate for 2020.

CHECK OUT: Police tackle mother like she’s armed and dangerous after altercation over wearing a mask incorrectly.